C. F. Møller Architects has won the competition to build a new, closed state prison on the island of Falster. The new state prison for approximately 250 inmates is designed as a low, urban structure, centred round the various leisure and working facilities, which are connected via several streets and a central square. 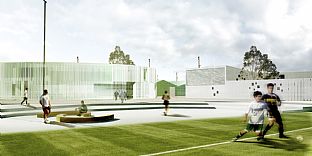 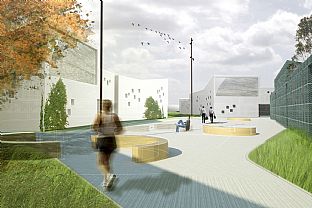 The design creates an urban environment, interacting with the landscape on both sides of the six-metre tall perimeter wall. For this compact, urban structure means that there is also left space for natural and cultivated areas, possible areas for animal husbandry and for the integration of sports facilities in the landscape within the perimeter wall. Mads Mandrup, who is architect and partner in C. F. Møller and responsible for this project, states: Varied and stimulating environment "The inmates spend all their waken hours in the prison environment, and the architecture within the prison walls is therefore an extremely important part of their lives and experiential universe. That is why we have deliberately created a very varied and stimulating environment of different spaces and landscape features - hopefully this will contribute to the resocialization of the individual and to create renewed confidence in the community and mutual respect for society as a whole." In the centre are an administration building, an occupation building and a cultural centre with library, religious worship room, sports facilities and a shop. Radiating outwards from here are the prison blocks - four ordinary block wings and one high security block wing. Each individual building in the total complex has its own identity. Overall, the complex is in a warm, grey shade of brick. Variation is provided by, amongst other things, the occupation building, which is crystal-shaped and faced with perforated metal plates in green shades, and the cultural centre, which is round, covered with glass and ringed by green slats. Dynamic, star-shaped perimeter With its corners and variations, the six-metre tall, star-shaped perimeter wall creates a dynamic sequence which gives a less restrictive appearance by providing a sense of dialogue with the outside world. C. F. Møller Architects has won the competition in collaboration with the engineering company Rambøll Denmark and in close dialogue with Marianne Levinsen Landscape, furthermore the design company aggebo&henriksen and the working environment consultants company CRECEA have contributed. Eight teams participated Eight teams were prequalified for the competition. The other architectural companies participating were Arkitema, schmidt hammer lassen, Lundgaard & Tranberg, Erik Møller Arkitekter, PLH Arkitekter, a team of both Kjær & Richter and aart and a team of Henning Larsen Architects and Friis & Moltke, The jury consisted of a number of expert judges, representatives of the Muncipality of Guldborgsund, representatives of the Danish Institute for Human Rights, the Danish Palaces and Properties Agency, and the Danish Prison and Probation Service. The new state prison on Falster is part of a long term plan to replace the old and outdated buildings of the Danish Prison and Probation Service. The plan is to close the state prison in Vridsløselille, dating back to 1859, when the new state prison is in use around the turn of 2015/2016. The winning proposal will be exhibited in the library of Nørre Alslev, Falster, in December. In 2011, all the competition proposals will be exhibited at Akademisk Arkitektforening, Copenhagen. For further information contact: Architect and partner Mads Mandrup, C. F. Møller Architects, mmh@cfmoller.com, telephone 32 88 78 44, mobile 29 65 11 23 Head of Department Erik Bang, The Danish Prison and Probation Service, telephone 72 55 40 01

Link for the jury's motivation (in Danish)