The Swedish branch of C. F. Møller Architects, Berg Arkitektkontor, has designed Sweden's new, spectacular skiing attraction, Skipark 360°, the world's most complete indoor ski park with e.g. a 700 m long downhill slope and a drop of 160 m, making it the only indoor ski slope in the world to meet the requirements for hosting the World Cup. 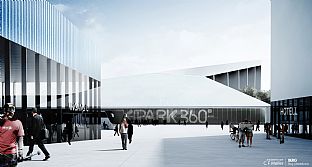 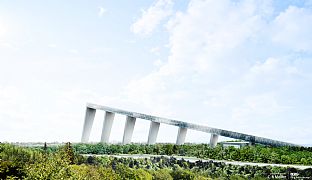 At a height of approx. 135 m, it will be one of Sweden's largest buildings, and will become a landmark in the forest landscape just outside Stockholm. Construction of the ca. 1.5-2 billion Swedish kroner project is expected to start at the turn of 2013/2014. The idea for the Skipark 360° in Bålsta - 45 minutes outside of Stockholm - came about as this proud skiing nation has experienced reduced snowfall in the last couple of years. With the new facilities, approx. 70,000 m2 in total, both elite and amateur athletes can train and enjoy the skiing season throughout the year. In addition to the downhill run, the complex will also contain a 3.5 km cross-country skiing tunnel, an arena for biathlon, ice hockey, bandy and figure skating, and a snow park for snowboarding. There will also be restaurants, shops, a spa and hotel and conference facilities, offering panoramic views of the countryside. The icon for the complex will be its downhill slope, which will rise as a new landmark. The building has a striking appearance, with a simplified silhouette that emphasizes the Swedish landscape of forest and lakes. But it is also dramatic in size - at a height of approx. 135 m, it will be one of Sweden's largest structures, and will possess a visual tension in the vast building's few support points, which taper downwards and meet the forest floor at an angle. Self-sufficient in energy Worldwide there are today approx. 30 indoor ski resorts for alpine use - the most well-known probably in Dubai. A newly-developed concept will ensure that the complex is the most eco-friendly of its kind in the world. The complex will thereby be self-sufficient in energy from renewable sources such as geothermal heating, solar power, wind power and hydropower. Skipark 360° has just signed an agreement with NCC to become the first partner on the project. NCC will also be board member on the project, and the parties signed a cooperation agreement that NCC will be in charge of the construction. The aim is to start construction at the turn of 2013/2014 and be able to inaugurate the new complex two years later. The cost of the entire complex is an estimated 1.5 to 2 billion SEK. The visitors are expectedly the 3.5 million people living within an hour's journey of the complex. In addition the new facilities are located close to the Stockholm airport Arlanda, close to the motorway E18 and in an area with good public transportation. The expected number of visitors is 550,000 a year. Success in Sweden C. F. Møller Architects has in recent years headed a great number of large construction projects in Sweden. This is the result of a focused effort. To strengthen the company's position in Sweden, C. F. Møller in 2007 took over the Swedish company Berg Arkitektkontor. The Swedish branch of C. F. Møller has since then worked with assignments such as the national stadium of Stockholm, Swedbank Arena, with seating for 57,500 spectators. Among the latest big winning projects are the new, 70,000 m2 cutting-edge laboratory building Biomedicum, a unifying power house for research at the Karolinska Institute in Stockholm, and a new ferry terminal for the city of Stockholm for the ferry connections to Finland and the Baltics. At present the Stockholm Branch is also working on a master plan for the re-development of the Lock, in Swedish called Slussen, in central Stockholm and an extension of the Vasa Museum. For further information: Architect and partner Julian Weyer, C. F. Møller Architects, tel. +0045 30 66 93 96 or jw@cfmoller.com Architect and Head of Branch Jan-Erik Mattsson, Berg Arkitektkontor, tel. +0046 8 555 760 25 or janne.mattsson@bergark.se Glenn Bovin, CEO of Skipark 360°, tel. +0046 70 851 35 59 or glenn.bovin@skipark360.se Head of Communications Ulf Thorné, NCC Construction Sverige, tel. +0046 85 85 523 46 or +0046 70 214 77 27 or ulf.thorne@ncc.se FACTS Around the world there are approx. 30 indoor ski resorts for alpine use - the most well-known of them in Dubai. Most of them, however, are situated in the Netherlands (7), the UK (6) and Germany (5). For indoor cross-country skiing, there are facilities in Finland (4), Germany (1) and Sweden (1).