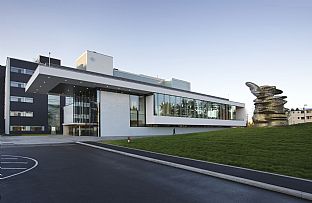 The most prestigious prize in the healthcare built environment, the Building Better Healthcare Awards, has declared the Akershus University Hospital by C. F. Møller Architects as winner of the Award for Best International Design. 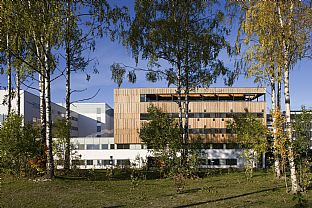 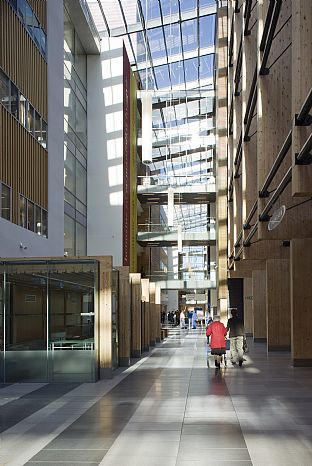 The UK Building Better Healthcare Award for Best International Design is intended to reward an outstanding project that contributes to new thinking and is relevant to the UK's future experience of delivering healthcare. The Akershus University Hospital in Oslo is one of Europe's most modern hospital designs and intended to appear not as a traditional institutional building; but as a friendly, informal place with open and comprehensible surroundings oriented towards the patients and their relatives. C. F. Møller has worked consciously to integrate the daily lives of the patients and "the world outside". The aim is to make admission as secure and as close to the patient's normal life as possible. Despite its size, the complex forms a comprehensible whole which is easy to find your way around, while at the same time allowing patients to feel at home in their departments. The internal, open boulevard, offering such services as a hairdresser, priest, library, café and pharmacy, is similar to an urban environment and normal daily life. The boulevard is five storeys tall, and concludes in a glass roof. Daylight plays an important role in making the various areas feel welcoming and secure, while the use of wood and other materials familiar to the patient from home helps create an atmosphere of safety and belonging. The Akershus University Hospital is also a highly sustainable design, making use of locally sourced materials, and geo-thermal energy to provide 85% of the hospital's heating and more than 40% of the total energy consumption. Short distances between functions, a clear organisation and extensive use of modern technology including robotics give staff more time for patients. The design is the result of a 1st prize in an international competition, won by C. F. Møller Architects in 2000. The buildings where completed on time and within budget, and inaugurated in 2008 after a 4 year construction period. The Building Better Healthcare Awards have been recognising, rewarding and celebrating best practice and world-class architecture, design, facilities and estates management in the healthcare built environment for a decade. Open to building, improvement and design projects which demonstrate all-round excellence, the BBH Awards celebrate the achievements of individuals and teams working in either the public or private sectors. The 2009 awards attracted a record 156 entries across a range of categories, and the final stage of judging under the chair of Susan Francis, Special Advisor for Health at the Commission for Architecture and the Built Environment (CABE), involved individual site visits of the shortlisted entries before choosing the winner. Akershus University Hospital: facts and figures  Akershus University Hospital serves thirteen municipalities with a total of approximately 340,000 inhabitants  The hospital has 4,600 staff members, of whom 426 are doctors  The hospital has room for 50,000 in-patients and can perform 21,000 operations per year  Number of beds: Somatic: 555, Psychiatric: 216, Substance abuse treatment: 27  The hospital has 22 operating theatres  The hospital possesses the world's largest automatic sample handling and analysis system  The building has a total area of 137,000 m2  It cost NOK 7.6 billion to construct  Client: Helse Øst RHF  Architect: C. F. Møller Architects, who won the commission via an international competition in 2000. For more information please contact: Architect Klavs Hyttel, partner at C. F. Møller Architects, telephone +45 8730 5300

Danish design to light up Copenhagen

BIRTH OF A NEW CLASSIC

Strong Nordic consolidation of the partnership

RIBA Award for the A. P. Møller School

Grand Opening of the Darwin Centre

Masterplan for the Slussen area in Stockholm

The largest hospital design commission in Danish history is won by a consultancy team led by C. F. Møller Architects