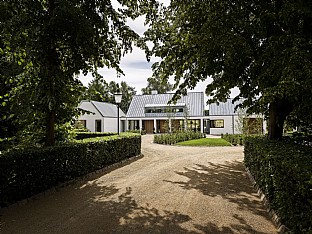 New construction of a villa which reinterprets the English country home with a modern and more Nordic expression.

A lightning strike caused the original structure to burn down, therefore the owners chose not to reconstruct a thatched house due to the inflammable nature of the roof. However, features of the original house are retained by proposing a classical approach and symmetry in the new house.

The new proposal is smaller than the original house and, with its division into a main house and annex wings, is less dominating and in greater harmony with the scale of neighbouring buildings. The relative positions of the building volumes also maintain the classical country home atmosphere and a cohesion with the site’s large park-like character. The buildings are located on the footprint of the original house, thus directly inserted in the existing garden. The roof is pre-weathered metal, to avoid solar reflections, with vertical seams and recessed gutters.

The facades are composed of light rendered masonry, combined with sections of modified, environmentally-friendly and long-lasting oak slats. All glazed sections are recessed in the eaves and framed by a classical arcade structure, softening the appearance of the glass.

In its presence, the building will thus occupy the space as a modern, classical mirroring of the original house.