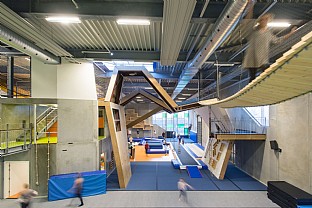 The Motor Skills Hall is an extension of the Aarhus Gymnastics and Trampoline Hall. The idea of the extension has been to design a hall which motivates the 3-10-year-olds to practise movement. 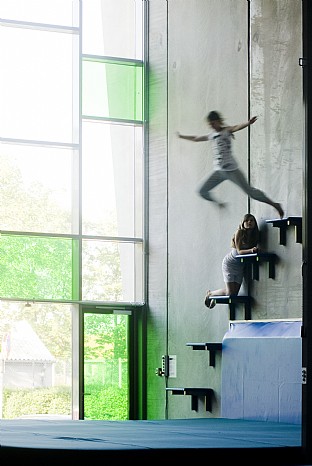 A sculpturally-formed climbing frame, called the seashell, extends across the hall, stretching right up under the ceiling, where there is a look-out tower at a height of eight metres providing a view of Aarhus Bay and Mols Mountains. The hall also invites movement through its many footbridges and platforms located along the length of the hall, and flexibly furnished zones called kangaroo land with trampolines and jumping equipment, and a so-called monkey land with ropes and jungle-like density. The unusual spaces which arise through the extension have also been put to active use; the slanting roof surface of the existing hall has for example been transformed into an indoor climbing wall.

From the outside, the hall has the appearance of a raw concrete shell, with large, slanting windows and stairways which lend transparency and dynamics to the facade.