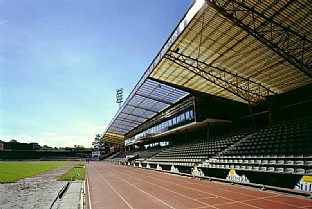 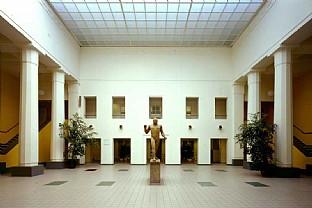 The original Aarhus Stadium was designed by Axel Høegh Hansen, architect, in 1916-18 and is a characteristic example of the neoclassicism of the time. The very young C.F. Møller worked at that time at Høegh Hansen’s ofﬁce and participated in the design of the project. In 1947 a com-petition was imposed for the total stadium and was won by C.F. Møller in cooperation with Gunnar Krohn, and in the period 1947-93 our ofﬁce has managed the conversions and extensions. In 1991-93 the stadium was extended with two new buildings. One with hotel facilities, ofﬁces for Team Dan-mark and a training hall. The other building is a boxing and dance hall. The classicistic and well proportioned facades of the original stadium is con-tinued in the new one with a modern rational classicism and consideration and respect for the main building.