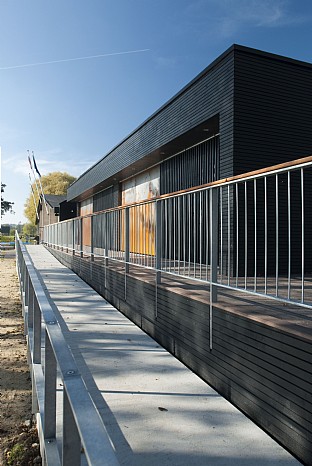 Brabrand Rowing Stadium, founded in the 1950s, is a common facility for all the rowing clubs of the city of Aarhus, with a 2,000 metre course that stretches almost the entire length of Brabrand Lake. 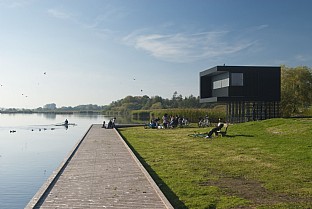 The new Brabrand Rowing Stadium lies in the landscape in the form of simple black wooden boxes. The clubhouse, which has been built in conjunction with an existing boathouse, is clad with narrow, black-painted wooden profiles, laid in varying directions, which give the facade a simple but also refined and captivating look.

The judges' stand rises up on a base of black wooden slats, with an almost floating appearance.

Mobile shutters can cover the windows, allowing the clubhouse to be closed off entirely. Behind the shutters, the facade has panels of Cor-Ten steel which give the buildings a different expression when they are on standby.

The clubhouse is raised one metre above the terrain as a precaution against flooding. The building is equipped with solar hot-water generation and solar cells, and is a sustainable design built to the Danish low-energy class 1 standards.