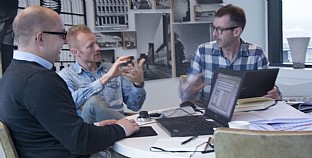 In the spring of 2009, on the basis of the politically agreed psychiatry plan for Region South Denmark, and in co-operation with the users and the psychiatric secretariat of Region South Denmark, C.F. Møller Architects drew up a proposal for a general plan, "Psychiatry of the Future", covering the combined psychiatric services in the region. The general plan focused on analysing "the good future patient trajectory" for psychiatric services for children and young people, and for adult psychiatric patients, including gerontopsychiatry. Work was also done on establishing standards for good construction of psychiatric units, and on feature requirements and space needs for both local psychiatry and psychiatric in-patient wards. In this connection, detailed discussions were held with the users (the staff of the psychiatric units) on requirements towards the design of psychiatric in-patient wards, including a concept for how the screened sections of wards could be designed to have a flexible size.
Facts

The general plan of Psychiatry in Region of Southern Denmark operates as a framework manual and guideline for the local psychiatry projects, which includes remodellings and new buildings in Aabenraa, Esbjerg, Vejle, Middelfart, Odense and more, with a total investment volume of approx. 1.9 billion DKR.