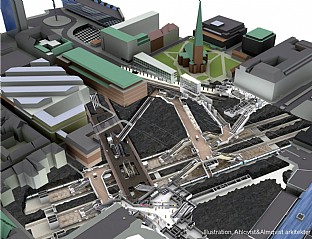 Southern part of the City Line, a new railway tunnel for commuter trains built under Stockholm's city centre. The new railway will connect to the existing track at Stockholm Södra and Tomteboda. On this section, two stations will be built: Station City at Centralstationen and Station Odenplan. Both stations will connect to the tunnel line. The train tunnel is an important public transport initiative that will increase track capacity through central Stockholm. The project will benefit local commuter train traffic and regional traffic, and thereby the future development of the entire Stockholm region. Ahlqvist&Almqvist is the firm of architects responsible for the overall assignment, and C.F. Møller is sub-consultant to Link and WSP for part of the building documentation for Station City.