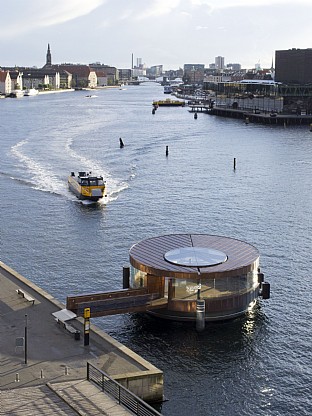 With the Opera Pavilion, which can accommodate 200 waiting persons, opera guests and other visitors to Holmen will have a place of shelter by the water bus quay. 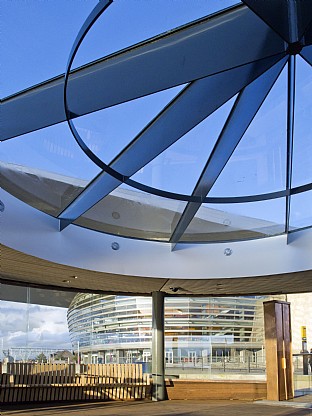 In its form, the building takes its cue from the existing semicircle of the jetty. The pavilion thus has a circular shape, with landings on two sides and a connecting gangway.

The clear, simple expression is underlined in the facade structure, which consists of two strips of copper, between which runs a glass facade offering 360-degree views.

The roof, which is slightly sloping, is also clad in copper, and features an asymmetrically-positioned round skylight, which gives the building's fifth facade a certain lightness. This unusual architectural treatment was desirable, as the entire building can be seen from the Opera foyer.

Copper has been chosen to create an architectural reference to the elegant, preserved control towers on the bridges of Knippelsbro, Langebro and Sjællandsbroen. Coppers ages beautifully and is resistant to the harsh harbour environment.

Marine-influenced materials and details can also be seen in the brass handrails, the detailing of the oak floors and ceilings, and the unusually shaped bench.

In the evenings, the copper pavilion is lit in a way which signals a welcoming and festive atmosphere, both to the harbour environment and the Opera.