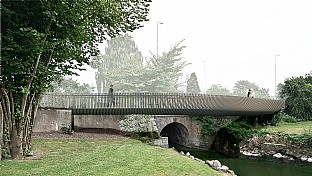 Historic landscape and listed bridge at Skanderborg in Denmark have been restored to their original expression with renovation and landscaping, where a new pedestrian connection and access to the lake shore recreates the area as an excursion destination. 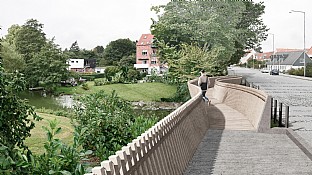 The listed bridge, Dagmar Bridge, connects the old island of Slotsholmen with the city of Skanderborg. The bridge is a historical monument and has been an attractive destination for decades. However, uncontrolled planting, a car barrier and a concrete extension to the bridge built in the 1960s, obscure and block the view of the bridge's façade, diminishing its historical significance.

Because the use of the bridge has changed from a main road to a less busy local road, it is possible to expose the original bridge deck and façade. By removing the car barrier and the concrete extension, which also narrows the bridge, the old granite bridge appears as it did when it was built in 1937. The cycle path and roadway will be retained on the bridge, with a new pedestrian connection added via a timber truss bridge on the outside of the Dagmar Bridge. The timber bridge turns a corner so that pedestrians can view the façade of the Dagmar Bridge with its harmonious arched opening.

The old landing area at the lake shore has been made accessible from Dagmar Bridge via a staircase, which helps to reinstate the original landscape around the bridge. A seating area with benches by the lakeside and a grassy area is created and the old stone wall along the lakeshore is restored.

With the recreational area by the water and the new pedestrian connection, the Dagmar Bridge can be viewed while floating in the air on the timber bridge or with solid ground underfoot on the lake shore. At the same time the renovation exposes the Dagmar Bridge as a historical monument.