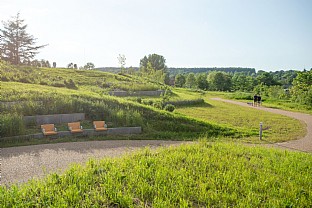 Transformation of a former industrial site in the center of Hammel, into an urban and activity-creating area for the benefit of the entire city. 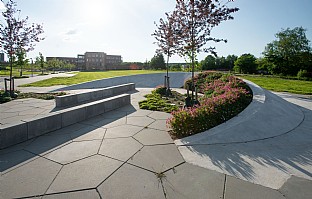 The transformation of a former industrial site in the center of Hammel provides an urban and activity-creating area for the benefit of the entire city. From the beginning, the Favrskov Municipality wanted the area to not be a regular suburban zoning case, which is why throughout the planning process emphasis has been placed on working with typologies such as multi-storey houses, point blocks and terraced houses as well as a string of urban spaces that can be used by all. In connection with the Dommerparken development, C.F. Møller worked actively with a unifying urban space strategy on three levels: one for the town of Hammel and the surrounding scenic areas, one for the immediate surroundings and one for the Dommerparken itself.

Room for all ages

This work has resulted in - in addition to a network of streets and paths - a recreational thoroughfare through the area, which connects Dommerparken, the city and the wider landscape. The thoroughfare is composed of a string of urban and green spaces, each intended for its own target group - children, young people, middle-aged and elderly. Central to the area is the Generation square, which can be occupied with temporary activities and can gather the whole city. As the development of the area will take place over several years, it is a priority that the area can contain temporary activities, which is why the upper secondary school has re-purposed an old cold store, and other volunteers have established a BMX cycle track.