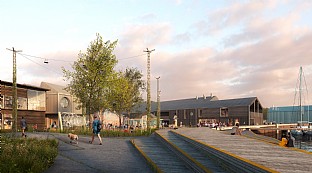 Climate adaptation and development of the Vestby by the Limfjord in Aalborg will protect against flooding and create an attractive fjord and park area connecting the water with the city while supporting the area’s identity.

Aalborg Vestby's coastal areas by the Limfjord are exposed to flooding due to rising water levels and frequent storms challenging the buildings at the habour and the residential area of Aalborg Vestby. The Boat Park extends from the old Liquor Factory to Vestre Fjordpark and is the last part of the area along the fjord in Aalborg which is threatened by flooding and appears disconnected from city. The area includes two marinas, a food market, and a bridge across the fjord. The Boat Park will climate-proof both the marinas and Aalborg Vestby while creating a new recreational link between the water and the city, which retains the area’s uniqueness that has emerged from the contrast between the well-organised and dense blocks of the Vestby, and the multifaceted harbour environment.

Currently disconnected urban spaces will be linked in a new route with cobblestones from the quayside, which will have a wooden promenade with seating areas at different levels. The quayside will be elevated, safeguarding the marinas but maintaining access to the fjord and the harbour basin inviting to activity, by and in the water.

With a future marked by storms and flooding, the Boat Park shows how coastal urban environments can adapt and exist in accordance with climate change.