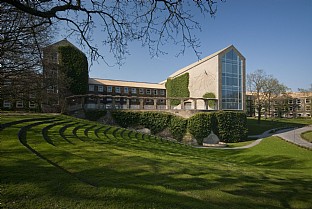 The campus is situated around a distinct moraine gorge and the buildings for the departments and faculties are placed on the slopes, from the main buildings alongside the ring road to the center of the city at Nørreport. 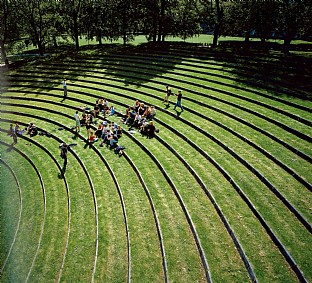 The original scheme for the campus park was made by the famous Danish landscape architect C. Th. Sørensen. Until the death of C. Th. Sørensens in 1979 the development of the park areas were conducted in a close cooperation between C. Th. Sørensen, C.F. Møller and the local park authorities. Since 1979 C.F. Møller Architects - in cooperation with the staff at the university - has continued the intentions of the original scheme for the park, and today the park is a beautiful, green area and an immense contribution to both the university and the city in general.

Further to this, landscape works has been undertaken in relation to the continuous integration of new buildings into the existing landscaped moraine valley.

Each landscape project takes its outset, and follows the original intentions with the parks overall plan, the material texture and scope of use. Specific details have been developed in accordance, hereby resulting in new variations and reinterpretations in the use of the park's four main building blocks: Meandering yellow brick walls, brick paved surfaces, lawns and oak trees.

The projects have improved access for all user groups to the older buildings, as well as optimizing the use of exterior space. Further to the landscape design C.F. Møller Architects has developed bespoke designs for outdoor furniture, signage as well as waste management systems.