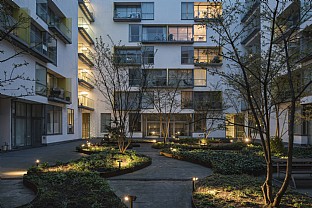 Nordlyset (Northern Lights) is a sculptural residential block with an expressive facade, located in the new urban quarter around Amerika Plads in Copenhagen. The development takes the form of a white-plastered block surrounding an interior outdoor courtyard. 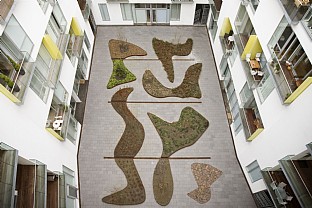 The courtyard is intended to hold an organically-shaped, well-planted recreational garden for all residents. The privacy needs of the ground-floor residents is accommodated, while the courtyard is generally useful and atmospheric. The courtyard forms a roof over the underground car park, so large-scale landscaping is not an option. Instead, green lawns, twining plants and low, pruned cherry trees will be established in winding beds.

The garden's lushness is important in order to form a peaceful, surprising, fertile "organic" space as a contrast to the surrounding disciplined, "hard" and very urban city. It has been partly inspired by the very green courtyards in Berlin's central block districts. As all of the flats have balconies facing onto the courtyard areas, the garden will to some extent be seen from above. Accordingly, it has been designed to be a "viewing garden", with inspiration from Baroque and Renaissance gardens, and in which the passage of the seasons can be followed in the varying structure and colours of the vegetation.