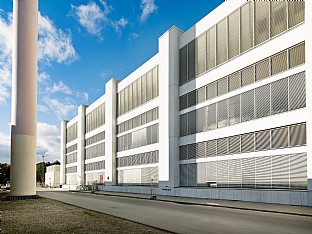 The Metropolitan Region has decided to gather sterilisation of instruments in two new sterile centresso as to achieve increased and unique quality with regard to management, training, the physical environment, apparatus, documentation and traceability. 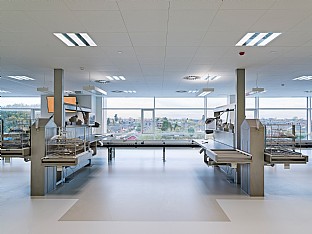 The project includes receipt of dirty carts, unloading, sorting, washing, sterilisation, packing of goods and distribution of clean goods and carts to the hospitals.

TheSterile CentralServices Department comprises three storeys and a basement storey that links up to the existing transportation tunnel at Herlev Hospital. On the roof of the building a screened-off cooling station is to be established.

As the requirements regarding room and storey heights in the Central Sterile Services Departmentare different to those in the existing service building, a separator in the form of an intermediate building is being established, with the south- and north-facing facades being drawn back. This marking in the facade is being used for human access to theCentral Sterile Services Department.

The facades maintain the expression of the existing service building with the raised base, the horizontal bands that constitute storey roof separators and the vertical facade markings. Areas in between are filled in with a transparent facade in the form of a glass/aluminium facade system in the two lower storeys and a closed facade system in the form of light sandwich elements on the top storey, where there are technological elements. In front of the facade systems there are sun screens.