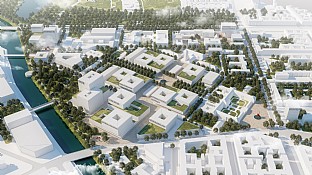 The design of the master plan for Campus Virchow Charité in the north of Berlin is based on a vision to open up the historic hospital campus and make it an integral part of the city. 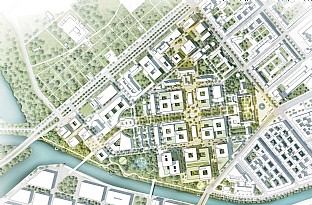 The existing campus, centrally located in the north of Berlin, is being developed into an open and publicly accessible campus with 4 new quarters, new squares and several parks. The area is being developed as an integral part of the city, providing access to large recreational areas and creating new green connections. The qualities and structure of the existing campus, originally one of Europe's finest examples of a Pavilion Hospital from 1906, are enhanced through the re-establishment of historical axes and the redesign of the central outdoor spaces that create connections through the campus. The transverse Mittelallee is strengthened through a low-rise building with a well-defined edge along the length of the avenue, as well as new landscaping that enables potential rainwater collection.

In designing the master plan, it has been important to define building plots as well as formulate clear goals and guiding principles to create the greatest possible flexibility and future-proofing for the development of hospital functions and research. Along the canal to the southwest, the campus opens up and a park with play and training facilities, recreation areas and a future super-cycle path to connect central Berlin with the western suburbs will be established. As part of the park along the canal, the historic patient garden will be re-established, which, as a link between the urban and recreational parts of the campus, creates space for reflection. Hospital functions will be relocated from the current central location along Mittelallee to the southern campus to create better functional links between the various clinics and to provide room for future expansion of new research or hospital facilities centrally on the campus.