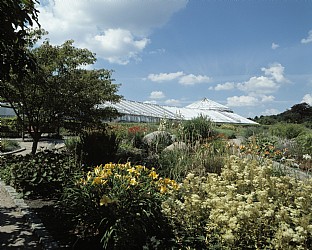 With its organic, sinuous form like that of an unwound snail, the exterior of the Hothouse in the Botanic Garden reflects its interior. The shape of the Hothouse, which was built for Botany teaching at the University of Aarhus, is determined by the site's rolling terrain, formed as it is by the remains of the murrain gully which runs down to the sea from its highest point north-west of Aarhus. The building follows the landscape and the winding terraces for perennial plants, which have also been laid out in harmony with the landscape. The Hothouse is divided into five sections, each with its own climate, and a large, circular palm house which concludes the building's snail-like sequence. 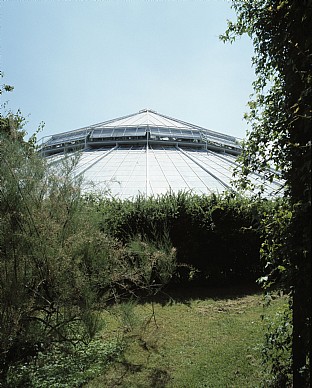 The Danish Ministry of Education

A comprehensive restoration of the old hothouse will turn the palm house into a new botanical knowledge centre, at the same time as the complex is extended with a new, 18 metres high tropical hothouse. To adapt to the original hothouse the organic form has been chosen again, furthermore this ensures that form and energy consumption interact in the best possible manner.