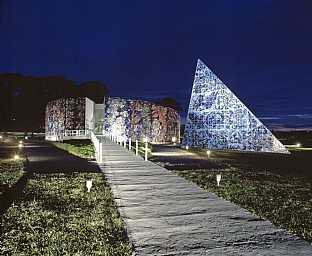 The Carl-Henning Pedersen and Else Alfelt Museum in Herning, Denmark, integrates art and architecture in colourful, sculptural forms. 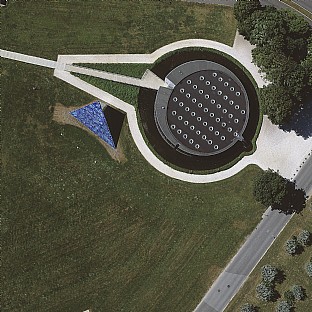 The art museum is built up around a large collection of works by these two artists, husband and wife, who were both active in the Cobra movement.

The museum's circular main building, which is clad with ceramic tiles decorated with Carl-Henning Pedersen's colourful mythical beasts, was built in the park of art collector Aage Damgaard's shirt factory that in 1976 was converted into an art museum.

In 1992-1993, the museum was expanded with an extension shaped as a three-sided prism - a mighty peak next to the round main building. One side of the prism is of glass, while the two other sides are covered with blue ceramic tiles, also painted by Carl-Henning Pedersen. Through the prism, light flows down into the subterranean exhibition hall that consists of a square room connected to the main building via a subterranean corridor. The geometry interacts with the other buildings in the Birk Centerpark culture and educational centre in Herning. Most of these buildings are designed by C.F. Møller.

In 2009, the museum gained extra space in the adjacent Herning Art Museum, and the latest extension in 2015 is taking shape below ground, connecting all three elements of the museum. Above ground, the only sign of the extension is a 15-metre long window in the lawn, which brings daylight into the new exhibition areas.