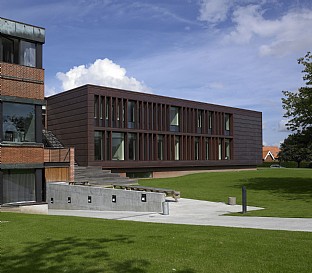 Business College Sønderborg, which is among the works of Jean-Jacques Barüel and is considered to represent some of the best architecture of the 1960s, has been expanded and redesigned. 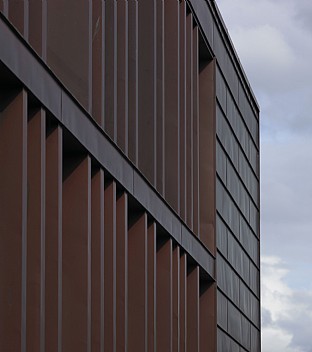 The school has been expanded with a new staff area and eight new classrooms, as well as a new common relaxation area adjacent to the canteen. The kitchen, canteen, and offices have been redesigned.

C.F. Møller Architects has approached the task with great respect for Jean-Jacques Barüel's original design. The facade of the extension is therefore composed of long horizontal and short vertical lines which take their cue from the existing building. The materials chosen are the same as in the original building, i.e. copper for the facades and white marble for the floors, as well as a consistent use of glass, wood and brick. The extension brings new forms to Business College Sønderborg, thanks to circular skylights. Large glass panels have furthermore been incorporated into the corridors, allowing more daylight to enter.

The extension has been planned to allow for the possibility of further extensions to Business College Sønderborg.