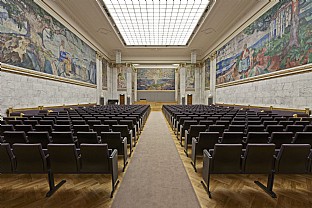 Interior and exterior restoration of the West Wing of Domus Media and the Main Hall at the University of Oslo. 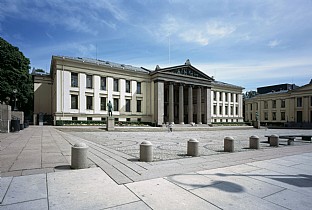 C.F. Møller Architects in collaboration with Erik Møller Arkitekter AS

The Domus Media building is a part of the university compound on Oslo's famous Karl Johansgate. The compound by architect Christian Heinrich Grosch was begun in 1811 and completed in 1856. It is considered a magnum opus of norwegian late empire-style, and Grosch's main work. For the 200th anniversary of the university, the Norwegian state has comissioned complete interior and exterior restoration works on the Domus Media, including the later added assembly hall (1911), as well as roof and facade restorations of the rest of the buildings.

The compound consists of three main buildings flanking the university square off Karl Johansgate, and a green park behind containing two smaller buildings. At the first centenary Domus Media was extended with an assembly hall which is today one of Oslo's and Norway's most important concert and ceremonial halls, and which houses a series of important Edvard Munch paintings. The hall has been used for Nobel Prize ceremonies, amongst other events. The listed building has been continuously altered over the years and is now being restored to an original state. The west wing with reading rooms, professorial offices and meeting rooms is further fitted out to accomodate state-of-the-art office facilities.