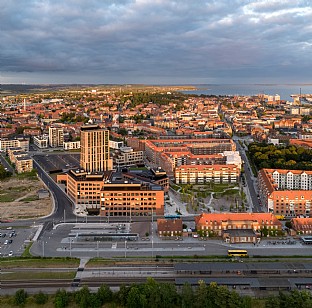 Transformation of a centrally located disused and inaccessible industrial area into a new vibrant district, uniting education, business and urbanity as a melting pot for the knowledge city of the future. 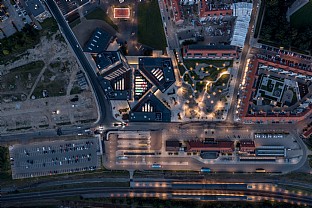 Campus Horsens is located in the centre of the city of Horsens in direct relation to the railway station and the city's recreational area Vitus Bering’s Park. The new campus district appears as an open, car-free and welcoming "city within the city" and is part of the area's urban structure, both with a continuation and new interpretation of classic urban motifs such as the urban block, tower building, alley, park and town square. Campus Horsens is focused on creating open and inspiring learning environments and academic hubs that create synergies and interdisciplinary relationships between different professional groups as well as students and citizens. With its size, varied border zones and surrounding buildings, the campus square is the campus' new multifunctional urban space. It offers opportunities for major events and physical activities, gatherings and celebrations, and is thus used for the benefit of both students and the city's inhabitants.

The knowledge city of the future

The focal point of Campus Horsens is the VIA University College Horsens, which was also designed by C.F. Møller Architects. The building unites education, business and entrepreneurship and the wider community in three atrium buildings and a tall 16 floor-tower, the Innovation House, which are connected through a large common atrium space. 21 different courses are gathered here around academic hubs and common environments such as public restaurant, café, library, “dramatorium” and auditorium. Building-integrated art has been created in collaboration between French artist Daniel Buren and C.F. Møller Architects and contributes to unique experiences for users and visitors of both Via University College and Campus Horsens in general. In addition to the VIA University College, Campus Horsens will house functions such as the School of Social and Health Sciences and will accommodate a total of up to 8,000 students on campus.

Campus Horsens thus becomes a unique attraction for students, innovative companies and citizens in an urban and knowledge community that contributes to Horsens' transition from a classic provincial town to a self-conscious and sustainable knowledge city.