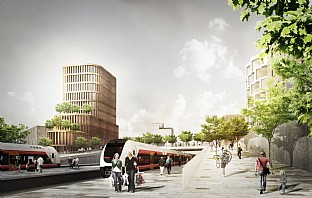 A proposal that uses a number of measures to visualise an overall plan to resurrect the centre of Vestby, with attractive green streets and urban spaces, an upgraded train station and a varied range of service, commercial and cultural opportunities. 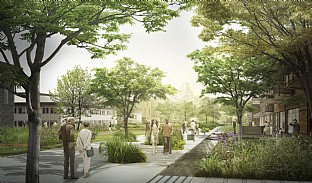 Vestby was founded in the infancy of mass private transport, resulting in urban spread and the death of the town centre. The aim has been to create a single Vestby centre with a consistent urban structure between the station area, Vestby Shopping Mall and IKEA. Vestby Centre will gain a distinct hub at the station, with a new and expanded bridge link across the track. The bridge will be established as a green and sunny central square with benches, views and a walkway to the platforms. This will increase consistency and reduce the barrier between the northern and southern parts of the town.

The project introduces a "Vestby loop": a ring road that defines the heart of the town, creating new connections across the railway line. The loop is for pedestrians and cyclists, while vehicles will have access to parts of the loop from the main road system.

Surveys show that 10,000 residents within walking distance is the critical limit for a living urban centre with a variety of facilities. With a clearly defined hub at Vestby station, the proposal is to construct 3,000 new homes in the centre and to establish streets and paths for pedestrians and cyclists, with the aim of ensuring a living urban centre, with more people and functions linked closely together.