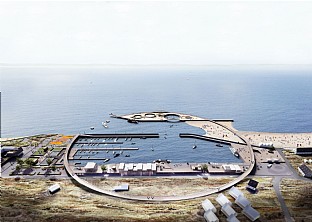 The former naval harbour in the village of Hörnum on Sylt is one of the rare interruptions of the beach and dune landscape of Sylt, with a proximity and connection to the water as no-where else on the island, and at the same time the opportunity to enjoy a plethora of activities as a spectator or participant. 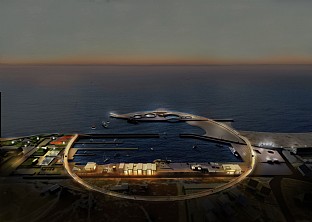 The port, which today is used mainly as a commercial port for mussel farming, as well as for tourism and sports boats, is strongly in need of repair or replacement, and the aim of the project is therefore to improve the infrastructure, security and usability of the port, while at the same time proposing a vision for a new icon and tourism magnet.

The concept brings together nature, the village and the sea in a spacious gesture that unites industry and tourism, urban and green areas, as well as the old and the new, providing leisure facilities and commercial users with improved facilities and, above all, allowing the two uses to co-exist safely and closely.

By replacing and moving the dilapidated North Pier, an enlarged port area for Yacht Club and Marina is created, as well as a new coastal beach park and plaza in front of an existing five-star hotel. A new open-air harbour bath also forms part of the cultivated, terraced landscape connecting the harbour basin and marina with the hotel. A new central boat shelter and multi-purpose hall combined with a raised deck forms a new level, like a reinterpretation of the classic "boardwalk", bringing port activity and leisure close together, but at the same time safely separating pedestrians and heavy port traffic.

A new circular one-kilometre promenade, the “Round", connects and develops all functions around the port from the north to the south – nature reserves, beach park, hotel, viewpoints on the dune slope, the Hörnum village centre and the sea. The round leads across the beach to a new "reef" that supplements the former protective outer jetty, with completely new possibilities in and around the sea, e.g. winter bathing, sauna, water sports arena and tidal pools, where the forces of the sea become really experiential and marine life can be observed up close.