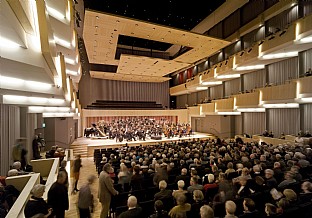 With its new extension the Concert Hall Aarhus has doubled in size, and now encompasses a wide range of functions that turn the total complex into a unique concert and educational institution of international standard. 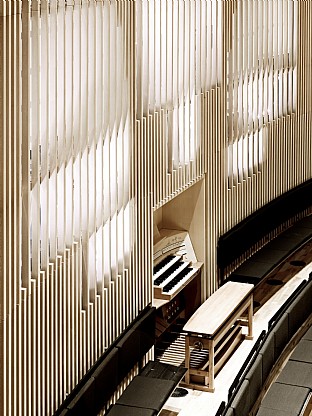 The extension includes a Symphonic Hall with sublime acoustics and room for an audience of 1,200, a Rhythmic Music Hall, a Chamber Music Hall, and premises for the Royal Academy of Music, Aarhus, the Aarhus Symphony Orchestra, the Filuren children's theatre ensemble and the Danish National Opera.

The Symphonic Hall is specially built for symphonic music, and functions in itself like a giant instrument, the sound of which can be adjusted by moving walls, carpeting and acoustic panels. The Hall's internal dimensions are carefully designed to produce the best acoustics; the model for its proportions is the Golden Hall in the Musikverein, Vienna, which is optimum for orchestral music.

The colours in the Hall are Nordic: light ash wood, grey acoustic panels and black seating. As a contrast, the inner walls are painted red, and when the acoustic panels are adjusted, the same red colour can be seen as a background.

The original adjacent Concert Hall was designed by Kjær & Richter, and was inaugurated in 1982.