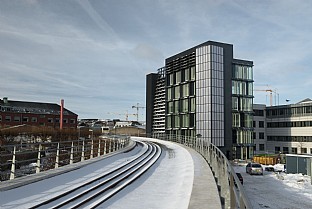 The office building, located in a development zone of the Port of Aarhus, is intended to provide a new landmark for the city of Aarhus – a striking image of energy architecture. 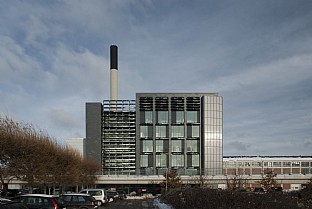 The aim has been to create an example of progressive office building construction, with energy consumption at 'passive house' level and a good indoor climate.

The facade tells the story of a building in which energy design has been used as a holistic approach. A 200 m slatted wall of solar panels and a 170 m2 solar wall provide distinctive, sculptural elements in the facade.

The office building has a large, south-facing facade and thus receives plenty of sunlight. To provide shade from the sun, the windows are recessed and are equipped with shade panels. These are clad with solar cells, and thus also produce electricity for the offices. Energy-friendly materials and elements with ultra-low thermal conductivity have been used throughout, such as vacuum-insulated windows. The building is twice as airtight in its design as required by the Danish building regulations.