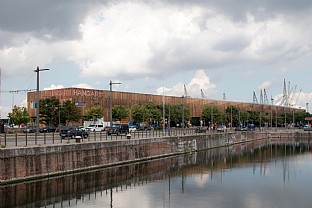 Historic warehouse in Belgium is revitalised into a living, urban hotspot that is true to the surroundings and the history of the harbour area where it is situated. 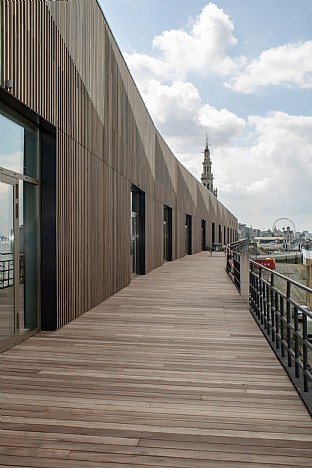 The old warehouse is located by the riverside of the Schelde, in the former Antwerp harbour area of ‘t Eilandje.

The transformation of this historic building includes a new mezzanine floor, a new façade, south facing roof boxes and a northern extension. Furthermore, the bank of the river Schelde is activated through an active waterfront, which simultaneously acts as an integrated flood protection. This new ‘urban staircase’ uses the architecture as a social invitation and creates a a strong connection between the city side and the river side for the inhabitants of Antwerp.

The building is currently standing on pilotis. A new mezzanine level is added beneath the existing upper levels and will cover the parking. This dynamic urban floor is transparent and open with large windows, reconnecting the building to the city and the river and blurring the boundary between inside and outside. The quay, the urban staircase and the street become one big open urban space. At the southern end, three new roof box extensions become panoramic workspaces.

A new timber façade brings legibility to the buildings’ seriality and defines the warehouse as an iconic visual landmark in Antwerp. The façade of the existing building continues architecturally over to a northern extension, creating a coherent appearance for the whole building volume.

Towards the northern side of Hangar 26/27 a new office building is realised. The architecture of this extension reflects the architecture of the historic warehouses in the harbour. The continuation of the timber façade creates an assimilation between old and new, while respecting the identity of each. The design is based on a visible modular construction grid that maximises flexibility, resulting in a simple and honest expression. Double height rooms in the building connect two different office floors on each occasion and combine flexible workplaces with panoramic views over the surroundings.

With this overall design, the scheme not only aims to be a fitting addition to the skyline of Antwerp, but it also aims to activate the city and set its recreational potential in motion.