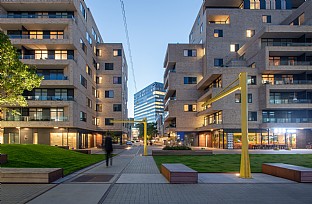 Frederiks Plads is a new, green urban plaza in the centre of Aarhus– named after the vibrant Frederiksbjerg quarter, to which it will bring even more life. 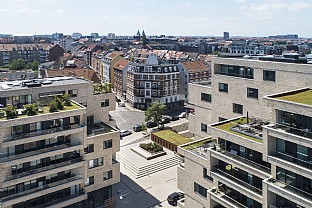 With this new, verdant oasis as a linchpin, the area, which for more than a century housed the repair workshops of Danish State Railways, will open itself up to the city, with streets criss-crossing each other and café and shopping life at street level, offering a market atmosphere in summer and a skating rink in winter.

The new urban plaza is surrounded by a mix of residential and commercial buildings whose heights have been closely aligned with those of the surrounding city – starting with Frederiksbjerg’s classic six-storey commercial buildings in red brick from the early 1900s, and ending in a fine finale with two 15-19-storey towers as neighbours to the area's other newly-built office blocks of 23-25 floors. In between lies a series of terraced residential houses with either a balcony or roof terrace, the rising forms of which maximise sunlight incidence in the apartments and present the best possible views of the bay and woodlands. The residential and office buildings are served by an underground car park in two storeys.

The seven buildings are as varied as the surrounding city, but they also have a common architectural kinship in their form and materials, including the use of brick, which at the same time refers to the area’s historical buildings, i.e. the preserved railway workshops and Aarhus Central Station, built in the 1920s.