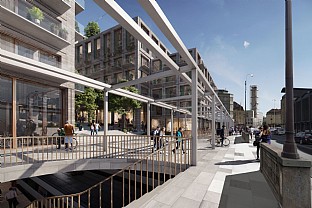 Masterplan for the covering of the existing railway, creating a green, car-free, and vibrant district for everyone. 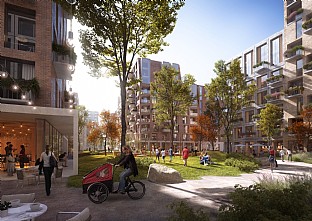 For over 100 years, Aarhus has discussed the possibility of building over the railway tracks at Aarhus Railway Station. The idea is to re-connect surrounding districts to the city centre, after they were brutally torn apart in 1935 as the railway line was expanded.

The masterplan for the Railway Quarter brings the city together again to create a completely new and attractive district. This is to become one of the world's most sustainable districts, one which lives up to national, international, and municipal climate goals. The district is based on a concept of embracing and creating coherence between the area’s urban life, urban spaces, and future buildings. The district will become green, with trees, shrubs, facade vegetation, roof gardens and front gardens which open toward the public. These create an interaction between those who live in the district and those who simply pass through.

Where before there was only room for trains, the new area covering the tracks will have space for everything - trains, parking for cars and bicycles, new green areas, and space for new homes and workplaces. This new car-free urban environment with pedestrian paths, bike streets and green urban spaces will reunite Frederiksbjerg with the city centre.

The area's buildings are designed with high architectural qualities adapted to Aarhus' DNA, urban history, and the uniqueness of the surrounding neighbourhoods. The Railway Quarter thus responds to the nearby context in Kriegersgade and Hallsti with their low-rise townhouses, while a single landmark high-rise building next to Bruuns Bridge marks the district's meeting with the more urban city centre. At Solnedgangspladsen on Frederiks Bridge, a new meeting place is formed where people can watch the sun set over the freight trains all year round.