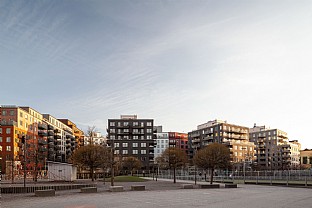 In the heart of the famous urban development area Hammarby Sjöstad in Stockholm, C.F. Møller has designed a new residential quarter with environmentally friendly homes and courtyards for families. 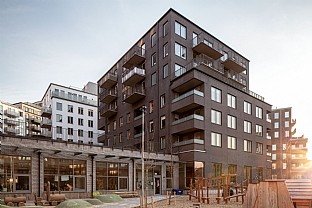 Hammarby Sjöstad is located just outside central Stockholm. The area has historically been a lively harbour and industrial area, and has now become the site of one of Stockholm's largest urban development projects. The transformation of Hammarby Sjöstad has created new homes for about 25,000 people, and has become a world-renowned example of sustainable urban regeneration.

The design of the Godsvagnen neighbourhood continues an existing linear park, Helios Park, and creates a green recreational environment in the midst of urban life, with clear distinctions between public and private. Three free-standing buildings complete the large courtyard block, and open it towards the park.

The 29,000 m² project includes 366 homes and a kindergarten, as well as shops/cafes. The spaces between the buildings ensure plenty of daylight and views from the courtyards to the Helios Park, and the public functions on the ground floors strengthen the park as an attractive public promenade.

The buildings are split horizontally, with simple and robust lower brick volumes, and more varied expressions in the upper volumes, rendered in bright, warm tones. The roofs are laid out as terraces, both public and private, with greenhouses/conservatories which can be used by residents all year round.