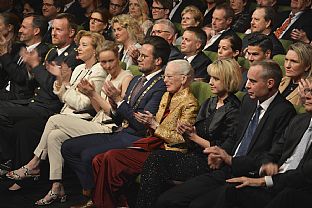 The week-long celebration of the C.F. Møller-designed concert hall in Odense reached its culmination on Friday, 5 May, when Her Majesty Queen Margrethe inaugurated Odeon and had the opportunity to witness some of the venue's many functions. 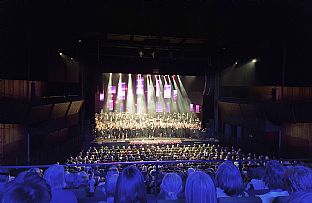 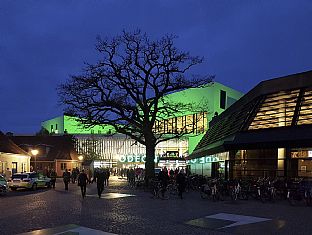 More then one hundred events in the course of one week have helped to put Odeon firmly on the cultural agenda of the people of Denmark.

The city's modern community centre complex, at the heart of urban development in Odense, was put to the test when Her Majesty Queen Margrethe opened the new venue on 5 May, in conjunction with a splendid gala show.

During Friday, the culture centre, which can accommodate seated audiences of 1,800, was filled to bursting point. There were no vacant seats left at all in Odeon's Great Hall when the Mayor of Odense, Peter Rahbæk Juel, gave his speech of welcome to the gala show.

"This is a building that is built for diversity, and we will get a taste of that this evening," said Peter Rahbæk Juel, who emphasised Odense's urban development role:

"Odeon is of particular significance to the city's development. There is a lot more to come," the Mayor said.

Wide-ranging
Throughout Friday, Odeon was the setting for many different indoor and outdoor events. In particular, the plaza outside the building and the building's large foyer were put to good use. This emphasised how Odeon can be used for many different purposes, as explained by Klaus Toustrup, CEO, partner and the architect responsible for the project at C.F. Møller:

"We've seen how Odeon can contribute actively to the city's life throughout the day and evening, with small happenings and concerts just inside the main entrance, acrobat performances and street theatre just outside, and splendid performances in the concert halls," he says.

According to Klaus Toustrup, the gala show was an outstanding example of this. A packed-out concert hall witnessed examples of Odeon's many different functions.

"The acoustics, lighting and stage technology functioned optimally throughout the show, during which a choir of 110 took to the stage, the symphony orchestra played, film was run on the big screen, and electronic music and heavy bass rocked the hall. This emphasises the Great Hall's multi-functionality," says Klaus Toustrup.

Communal meal set the right atmosphere
Even though most of Odeon's audience for the gala show in the Great Hall on Friday were in evening dress, Odeon's multi-functionality was also demonstrated at Odeon Social, the building's venue for social events. This is where local residents and visitors to the city can meet to share an evening meal together. Friday was no exception.

"This emphasises Odeons 's diversity. Odeon is for the whole city, and the entire country. It 's wonderful to see the building's many functions being put to good use.

This sets the right atmosphere, so that a venue that might be seen as rather exclusive can become more down-to-earth," says Klaus Toustrup.

Odense's local residents share this opinion. Odeon Social brings the grand Odeon project right down to earth. This is confirmed by Niels Christensen, aged 54, who attended the communal meal at Odeon Social prior to the gala show.

"You get the sense that this is a place where everyone is welcome. It's great that you can just show up, take a seat at a long table with some friends or family members, and enjoy the great atmosphere and the lovely food," is how he describes the concept.

"I'm here for the first time, and I don't think it will be the last."

The Odeon project dates back to 2006. The financial crisis deferred this project, and over time the client constellation also changed. Together with KPC Byg, the other parties involved in the construction project are Odense Municipality as the client and user, the Danish National Academy of Music, the Danish National School of Performing Arts - Acting School in Odense, as tenants, H.C. Andersen Kongres Center A/S as operator and tenant, and Partnerskabet for omdannelsen af Thomas B. Thriges Gade.