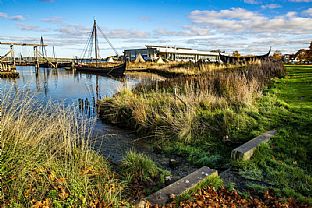 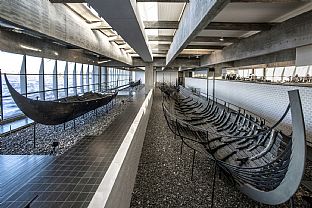 A total of 42 applicants, representing more than 130 Danish and international architect and sustainability consultancies, have applied to be part of the competition about developing and transforming the Viking Ship Museum in Roskilde. According to the Viking Ship Museum, the field of applicants was highly qualified. And the Museum, has gone through a long and thorough process where all applications have been reviewed and assessed together with their advisors and Roskilde Municipality.

- We are both honoured and proud to be given this opportunity. The project offers a unique opportunity to create and further develop a landmark for Roskilde that can carry the town into its cultural future. But also an opportunity to safeguard an important part of the Danish cultural heritage, says Thue Borgen Hasløv, partner at C.F. Møller Architects.

According to the Viking Ship Museum, the new museum will be a shining example of international, cultural and sustainable museum building. It will be a museum of high architectural and experiential quality that vividly and actively communicates the history and culture of the Viking Age, ships, seafaring and boatbuilding. A new building for arrivals and exhibitions, and a transformation of the original Viking Ship Hall, designed by Erik Christian Sørensen, combined with an architectural upgrade of the outdoor areas, will ensure that visitors have a coherent museum experience. Further, the project strengthens the public access to the coast and fjord.

"In a global perspective, the pan-Nordic heritage is peculiar and important in today's interpretation of past, present and future. The further development of the Viking Ship Museum in Roskilde will be a decisive step in communicating the history of our common heritage", says Kjetil Trædal Thorsen, Founding Partner of Snøhetta.

The vision, objectives, design criteria and requirements for the new museum are described in a competition programme, which will be published for the five competition participants on 12 December 2022, when the competition kicks off.

The final winning design of the architectural competition is expected to be published in December 2023.

"We are overwhelmed by the very high interest we have seen from both Danish and international design firms, and we have had to make some difficult choices in selecting the five teams that will now participate in the architectural competition," says Tinna Damgård-Sørensen, Director of the Viking Ship Museum.

C.F. Møller Architects will act as the team's general consultant. In collaboration with Snøhetta, the team ensures a strong and Nordic approach to the Viking Ship Museum of the future.

For 33 years, Snøhetta has designed some of the world's most remarkable public and cultural projects. Snøhetta was founded on the competition-winof the New Library in Alexandria, Egypt in 1989. This has been followed by the Norwegian National Opera in Oslo and the 9/11 Memorial Museum Pavilion at the World Trade Center in New York, among many others. Based in Oslo and New York, and with offices in San Francisco, Paris, Hong Kong, Innsbruck and Adelaide, Snøhetta is currently working on more than 150 projects internationally, including many cultural projects ranging from small exhibition designs to complex museum transformations and the construction of world-class concert halls and opera houses.

C.F. Møller Architects has been shaping Danish and international architecture for 98 years with award-winning projects in the Nordic region and around the world. The firm is behind Aarhus University, and has designed and implemented significant cultural projects. For example in London, where the architects are behind the Darwin Centre Phase II at the Natural History Museum, the National Maritime Museum and the Sammy Ofer Wing. In Denmark, the extension of the National Museum of Art in Copenhagen, and the extension of Concert Hall Aarhus as well as the extensions and conversions at Aarhus Theatre, Vendsyssel Art Museum, Aarhus Steno Museum and much more.

The competing teams are:

The project is supported by Roskilde Municipality, the Villum Foundation, the Augustinus Foundation and the Aage and Johanne Louis-Hansen Foundation.