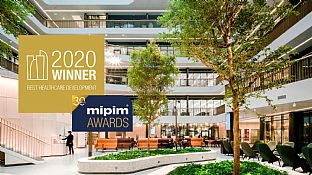 C.F. Møller Architects wins a MIPIM Award in the category of Best Healthcare Development with Biomedicum, a powerhouse research complex in Stockholm for the Karolinska Institutet. 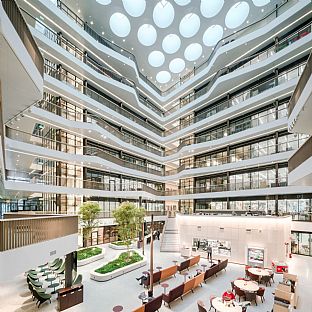 This year’s MIPIM Awards ceremony took place in Paris where it was announced that C.F. Møller Architects was the winner in the category of ‘Best Healthcare Project’ with the research powerhouse Biomedium in Stockholm.

“We are very pleased to win this award and would like to thank Akademiska Hus, Skanska and Karolinska Institutet in Stockholm for a great collaboration and making it possible to achieve this great result”, says Mårten Leringe, Partner and Architect at C.F. Møller Architects.

Powerhouse for research
The new laboratory building, Biomedicum, is the research powerhouse for the Karolinska Institutet in Stockholm, one of the world's leading medical universities, notably known for selecting the recipients of the Nobel Prize in medicine and physiology.

Previously, the research environments of the Karolinska Institutet were scattered across the campus, a green park area with red brick buildings dating from the 1930s. With Biomedicum, the Karolinska Institute gains a single unifying environment for future research, with ultra-flexibly equipped laboratories and office facilities that will act as a catalyst for cross-cutting collaboration between the various research and study environments.

The new construction is not only intended to provide a building in the campus park but also to accommodate the park within the building. With a glass-covered green atrium the outdoor campus area is continued through the building, thereby reinforcing the social qualities of the green campus to the benefit of knowledge-sharing and interdisciplinarity.

The building's openness is created with a transparent and inviting ground floor with access to the atrium as well as a café and public exhibition space. This also forms new linkages through the park and thereby opens up the Karolinska Institutet towards both the city and new planned university hospital, Nya Karolinska Solna (NKS), which will be directly adjacent.

“Biomedicum is a showcase of our beliefs in human interaction in a seamless architecture, used as a driver for innovation and fruitful interdisciplinary collaboration. The same approach is seen with the Maersk Tower in Copenhagen which we also designed to be a cutting-edge laboratory building for the University of Copenhagen”, says Mads Mandrup Hansen, Partner and Architect at C.F. Møller Architects.

Biomedicum will thus become a pivotal point in the area - a distinctive icon for the world-class research for which the Karolinska Institute is known.

The complex was completed ahead of time and under budget.

About MIPIM Awards
Created in 1991, the MIPIM Awards is an internationally renowned real estate competition at MIPIM, the world's property market. It honours the most outstanding and accomplished projects, completed or yet to be built around the world, and showcases the very best of the real estate industry.