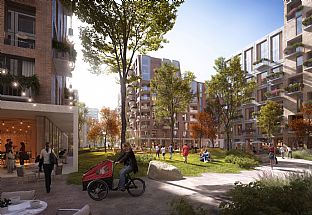 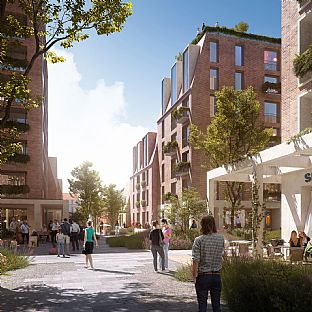 C.F. Møller Architects' masterplan situated over the railway in Aarhus creates a green, car-free, and vibrant district for everyone. 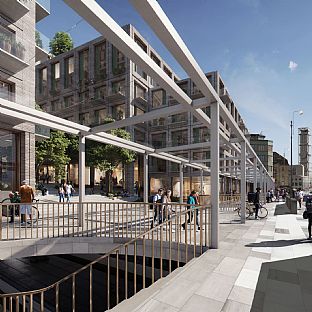 Aarhus will gain a completely new district named the Railway Quarter, if in November, Aarhus Municipality decides to proceed with plans for building over the railway at Aarhus Railway Station between Bruuns Bridge and Frederiks Bridge. With its central location in the middle of Aarhus and as a traffic hub through which thousands of people pass every day, the Railway Quarter has the potential to become a green, car-free, and vibrant district for everyone who lives, works and travels through the area.

“We are very pleased to be able to present a clear vision of a completely new, green and car-free district which binds the city together and will benefit all citizens of Aarhus. We are very much looking forward to our masterplan proposal being included in the upcoming public debate on the area's development, so that the urban potential of this central location in the heart of Aarhus can be realised and utilised for the benefit of all,” says Michael Kruse, partner and architect at CF. Møller Architects.

Green district for everyone
Where before there was only room for trains, the new area covering the tracks will have space for everything - trains, parking for cars and bicycles, new green areas, and space for new homes and workplaces. This new car-free urban environment with pedestrian paths, bike streets, and green urban spaces will reunite Frederiksbjerg with the city centre. The area will be a district for everyone - citizens, residents, and visitors, making it easy and convenient to use and switch between different sustainable modes of transport.

“The new district will mark a historic change in the most central part of Aarhus, which is why we have approached the task both with great humility to ensure understanding of the context, and with soaring ambition to create the framework for guaranteeing the area's development has the best conditions for success of an international calibre,” says Michael Kruse. 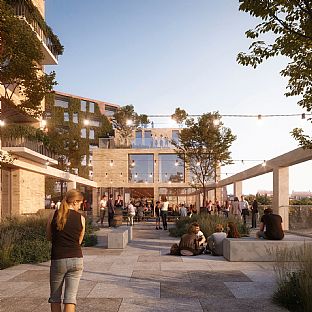 Qualification of the plan

Work on the masterplan began in September last year after Aarhus Municipality decided to enter into a collaboration with DSB Project Development, Pension Danmark, and MT Højgaard Project Development, with C.F. Møller Architects as a consultant, with a view of jointly exploring the possibilities of building over the tracks between Bruuns Bridge and Frederiks Bridge. The draft masterplan for the Railway Quarter is now part of a consultation where citizens can contribute suggestions and ideas for the municipality’s continual planning process. The city council is expected to make a final decision on the future of the project by the end of the year.

“Work on the draft masterplan we submitted has been extremely thorough. This has been necessary to ensure that the project can be realised both technically and financially. We are now looking forward to presenting and discussing the possibilities with the citizens, politicians and professionals,” says Søren Beck-Heede, CEO of DSB Project Development. 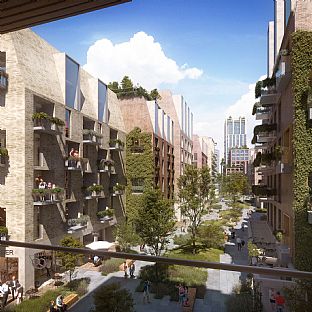 One of the most sustainable neighbourhoods in the world

The outline masterplan for the Railway Quarter envisages the new district becoming one of the most sustainable districts in the world, meeting both national and municipal climate goals. The district will become green, with trees, shrubs, facade vegetation, roof gardens and front gardens which open toward the public. These create an interaction between those who live in the district and those who simply pass through.

The district creates a car-free environment with cleaner air and less traffic noise from trains and cars, where it is safe and secure for pedestrians and cyclists to travel. The neighbourhood provides an opportunity to create appealing conditions for families with children through dedicated space for play and activities, as well as a number of family homes, meeting Aarhus Municipality's need for more family housing in the city centre.

“The complexity and conditions of the task have given us the opportunity to think anew and create a new type of innovative urban development. One which ensures both efficient mobility and at the same time establishes a car-free district; incorporates constructive conditions so that light structural materials with a low C02 footprint - such as timber - are used in the future; and establishes urban life, urban spaces and buildings of the highest quality for the benefit of all citizens. In other words, elements that will help create one of the most sustainable districts in the world - as a natural part of Aarhus,” says Michael Kruse. 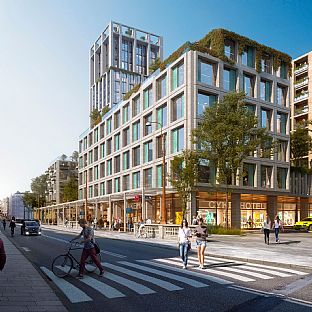 Covering of the railway to be realised in 2026

The existing railway pit which cuts the city in two, is the result of an expansion of the railway line in 1918-1924. This major intervention through Frederiksbjerg, resulted in the demolition of many houses and buildings, leaving Frederiksbjerg Quarter cut off from Aarhus city centre. Since then, covering the area has been discussed several times, to make better use of the attractive areas in the centre of the city, and at the same time reunite the city's disconnected neighbourhoods.