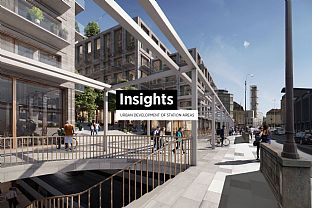 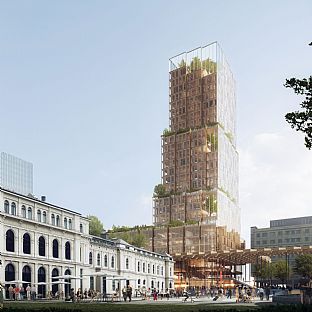 The central station of the future will function as an efficient traffic node, through which many different flows can navigate smoothly. In addition, the station area must provide space for people to live and meet, with public places, greenery and sunlit spaces. 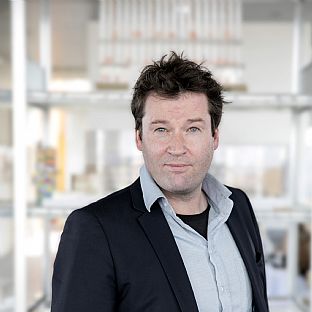 During the last 50 years, the land value in areas close to stations has increased steadily as multinational companies have placed their headquarters in these areas. The development has contributed to a growing need to build higher and denser around central stations, but just as important, according to C.F. Møller Architects, is to strengthen the city's identity.

- Growth in the city is positive, but it should not be growth for the sake of growth. From the city planner's perspective, it is treacherous if it goes too fast, and we all have a great responsibility for future generations when designing urban developments in the heart of any city. One needs to think of urban quality and create places that will work and grow with a 100-year perspective, says Michael Kruse, partner and architect at C.F. Møller Architects.

Since the central station is often the first thing that city visitors encounter, the area around the station should be developed so that it stands as a symbol of the place and strengthens the city's identity. The central station should be an effective hub for national and regional communications, but also a meeting place that strengthens the attractiveness of the larger area. At present, station areas are often cluttered and poorly used by the many people who pass through them and they have often been planned with traffic in mind, rather than people and green spaces. 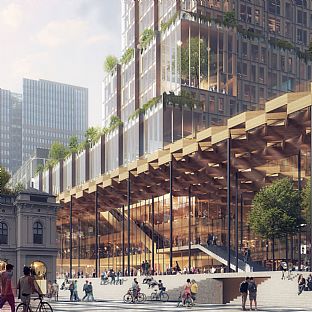 Station areas are intensively used, and they often suffer as they have had to grow rapidly to be able to handle an increase in travelers as well as a growing city with new needs.  It is important to understand how the station works in relation to traffic flows and the needs of the future traveler, in order to be able to unlock potential and provide a more space-efficient solution. With this as a basis, we get the opportunity to build spaces that enrich the city's design and flows that had previously been problematic, with these becoming the driving forces that are used to create social life, housing and commercial activity.

- Those who work with infrastructure must have a holistic approach and take many parameters into account. Infrastructure can work for the whole, it can link a city together, but it can also segregate. These are places for people, and the first thing we encounter when we arrive in a city, says Mårten Leringe, partner and architect at C.F. Møller Architects. 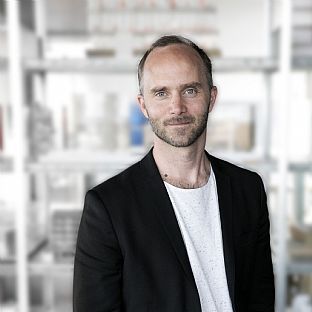 Identity - based on the place

According to Mårten Leringe, one way to generate identity in an area is to start from the history of the place. An example of this is seen in the central station in Oslo, the so-called ‘Fjordporten – Nordic Light’, where C.F. Møller Architects designed a tower that relates to the "cathedral room" in the existing Østbanehallen. The tower has a staircase that is inspired by Oslo's landscape and buildings. It is built –with a nod to the time when the city was built of timber – in wood, concrete and high-tech glass. The arrival hall is designed so that it unites the many different flows into a whole. The room contributes to the capital's identity.

- A station area should be adapted to the scale of nearby areas. We want to work to heal the city and tear down the barriers that the infrastructure once created, says Mårten Leringe.

When C.F. Møller Architects designed the Railway Quarter in Aarhus, Denmark, it was with a vision to reunite the city, after the districts in the centre were split by the railway station’s expansion in 1935. The covering of the central railway station in Aarhus, and the masterplan that C.F. Møller Architects has developed, provides space for a new, sustainable district where previously there was only room for the trains in the railway yard.

- Infrastructure issues must not just be reduced to technical solutions. We are transforming station areas into sustainable and vibrant neighborhoods where more people can socialise, work and settle down. Station areas should link surrounding neighborhoods, not separate them. We must always take as our starting point the social values ​​that are created in a place, says Mårten Leringe. 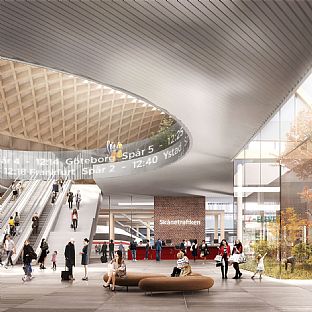 Stockholms Hamnar's passenger terminal in Värtahamnen is another example of an infrastructure project where C.F. Møller Architects has chosen to focus on the terminal as a meeting place, as much as they have focused on the site as a departure hall, ferry terminal, bus terminal and combo terminal.

When the port plan in Värtahamnen was to be expanded to accommodate the amount of goods transported from the port, C.F. Møller Architects took the task on with a focus on the long-term development of the port - as well as nearby areas.

- We related the assignment to the future urban development in the area. To affirm the port's needs, but at the same time also the city's needs in the form of growth for housing and trade, we created a new meeting place on the roof of Värtahamnen. The roof will be a direct link to the new district, and will function as a park with plants, paths and benches, says Mårten Leringe.

At Lund Central Station, Sweden, C.F. Møller Architects focuses on the station's potential to become a modern meeting place, in addition to being a well-functioning infrastructural node for Lund and for the wider region. The new station was built with inspiration from Lund's building tradition and with a focus on creating a new space for everyday activities for its users, by including the roof as an active part of the building. 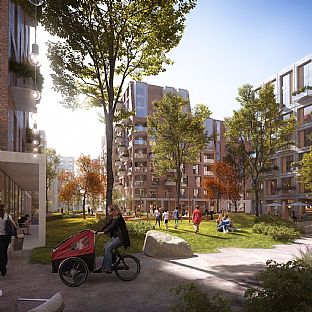 The Railway Quarter is intended to be one of the most sustainable districts in the world. Around Aarhus Central Station, C.F. Møller Architects has planned for a completely car-free district that reunites Frederiksbjerg and Midtbyen (Inner City), two areas that the railway tracks once separated. Climate-friendly materials and climate-neutral buildings, built in lightweight constructions with, for example, timber, are integrated in the masterplan – something C.F. Møller Architects generally will prioritise.

- We live in a time where a culture of waste looms, and where there is a risk that greed plays a role in urban development. We affect nature and human well-being in everything we do. Therefore, architecture, which is the framework of society, must be based on good and long-term ambitions. In this way, sustainable urban development in direct relation to public transportation becomes one obvious solution as to how to deal with the global megatrend of urbanisation says Michael Kruse.