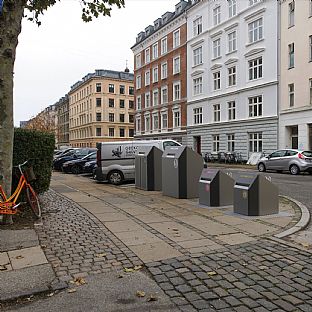 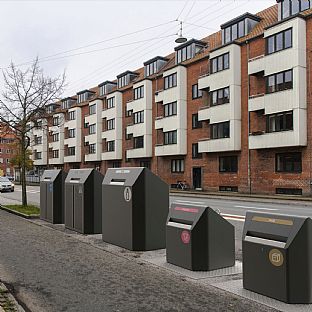 C.F. Møller Architects with Alexandra Instituttet has delivered the winning design of a new solution where Copenhageners can sort household waste in the urban realm. 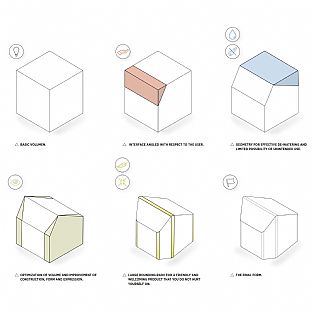 In November, the City of Copenhagen announced a design competition, where five teams would compete to create the design of the new urban space equipment for sorting household waste.

The design of the waste solutions had to be characteristic of Copenhagen, similar to the old Copenhagen streetlamps and the city's benches and waste baskets, which also have an iconic and recognisable form.

The solution will complement the existing household waste collection scheme and will not replace the bins for street waste currently found in the public environment.

The winner was announced on Wednesday, 4th March. C.F. Møller Architects with Alexandra Instituttet have delivered a design which, according to the Evaluation Committee, has particularly pronounced sculptural qualities to enrich the Copenhagen city landscape.

The winning proposal is based on a hexagonally-cut cube that produces a main shape with angled surfaces.

The Evaluation Committee considers that relatively few constructive but essential adjustments during the product development phase will give Copenhagen a waste sorting solution that not only tolerates the replication required by the approximately 750 sorting points but which will also enrich the city.

Technical and Environmental Mayor Ninna Hedeager Olsen (EL) says,
“In coming years, Copenhagen will be taking major steps towards greater sustainability and a circular economy.
One of the means of achieving our ambitious target of 70 percent sorting of household waste is to ensure that all Copenhageners can sort their waste in an easily accessible way in their everyday lives, and here the new solutions play an important role. I am pleased that Copenhagen can now take another step in a green and sustainable direction.”

City architect and chairman of the Evaluation Committee Camilla van Deurs says,
“The winning proposal provides Copenhagen with a new icon that can be included in the city's spaces to match other iconic urban elements such as the Copenhagen bench or Copenhagen streetlamp.
The sorting points refer in their design to a basic known geometric form as a modern interpretation of the city's fire stations, thus creating a playful reference to the city's architecture.
The points meet the city floor in soft shapes and are dimensioned according to a human scale, thus achieving a friendly, welcoming and elegant design that can be adapted and combined in the most varied ways in the city's many diverse spaces.”

The two judges of the Evaluation Committee, Pil Bredahl and Thomas E. Alken say,
“We agree that the City of Copenhagen has undertaken a very relevant and ambitious task with the creation of the design competition for waste sorting for the inhabitants of the capital.
It speaks directly to the expectations and demands we have and is going to contribute to a modern sustainable metropolis.
In many places we are already sorting waste, but putting sorting further into the system, in a way where we understand waste as a resource, is the right way forward.
At the same time, an aesthetic element that can withstand replication is important in the design of the physical collection points.
In this way, the appearance must also be sustainable; it must be able to be maintained visually in the city's different environments.
We believe that this project can make Copenhagen the frontrunner in terms of design that promotes sustainable development. The five finalists have each produced strong concepts with a good understanding of the complexity of the task and with a clear love of the city.
That is precisely why Copenhageners can look forward to a design that will stand out as a credible landmark for a greener capital.” 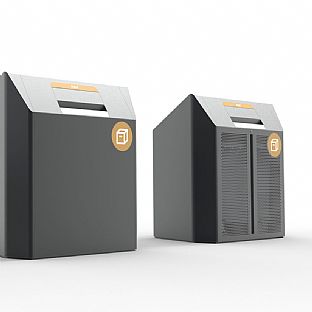 Jon Brøcker, Head of Industrial Design at C.F. Møller Architects says,
“We are proud to be named as winners in this strong field and are excited about helping the City of Copenhagen to achieve the recycling targets in the municipality's ambitious Resource and Waste Plan 2024.
Our ambition with our design proposal for waste sorting points is to contribute positively to the continual development of Copenhagen's unique identity.
We have endeavoured to add a pragmatic and poetic layer to the design and strike the delicate balance between the need for visibility on the one hand and careful integration into Copenhagen's different types of urban spaces on the other.”

A big puzzle awaits
By 2024, the City of Copenhagen will expand its existing collection of household waste with up to 750 waste sorting points on roads and in other public areas. The location of each sorting point is not yet known.

The facilitation will take place in stages and each stage plan will be submitted to the Technical and Environmental Committee for approval, with local committees included in determining the locations.

The sorting points will be adapted to the individual local areas, such as buried containers or some form of cube or container solution.

After a standstill period, a manufacturer of the sorting equipment must be found who can deliver, test and produce the containers for placement in the city. 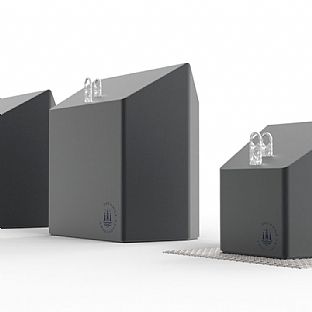 More sorting space needed
The majority of Copenhageners support waste sorting, and since 2012 the proportion of sorted household waste has increased from 27 to around 45 percent.

A majority in the Technical and Environmental Committee has set an ambitious target of collecting 70 percent of waste for recycling by 2024.

Currently about 34,000 homes do not have space in their courtyards to sort all of the waste fractions.

With the sorting points, Copenhageners will have the opportunity to deposit their source-sorted waste resources both in the courtyard and in the street environment, and for many it will mean more flexibility in everyday life and thus become the extra push needed for increased sorting.

Information
The five teams in the competition were:

A majority in the Technical and Environmental Committee has set an ambitious target of collecting 70 percent of waste for recycling by 2024.Today, the figure is barely 45 percent.

The public sorting points are an initiative that is part of the municipality's Resource and Waste Plan 2024, Circular Copenhagen, which was ratified by the City Council in 2018.