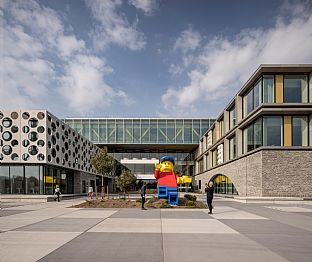 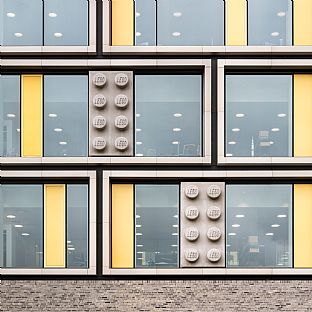 Brick by brick, the state-of-the-art Campus is designed to inspire innovation and creativity for some 2,000 employees and provide an inspiring base for all LEGO Group employees worldwide.

After five years of construction and planning, the LEGO Group is celebrating the official opening of its state-of-the-art Campus at its headquarters in Billund, Denmark today. Designed by C.F. Møller Architects, the campus spans 54,000 square metres, creating an innovative workplace for approx. 2000 colleagues, and a home away from home for all LEGO Group colleagues across the world.

Reflecting the LEGO Group values of ‘Imagination, Fun, Creativity, Caring, Learning, and Quality’, the Campus has been designed to provide a playful, inclusive, and collaborative environment that enables employees to develop the best play experiences for children all over the world. 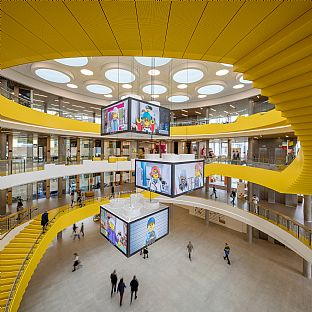 ”It is with great pride that we now see the inauguration of LEGO® Campus, a project that has been created in a trusting and inspired collaboration where all parties have focused on creating a unique lively sustainable office building, filled with surprises and play that supports collaboration, creativity and concentration.
The architecture is conceived as a mini-city, composed of houses that form inner streets, squares and courtyards, where workplaces, neighborhoods and activity areas merge with the surrounding landscape of green roof surfaces, terraces and gardens. We look forward to seeing LEGO Campus inhabited and further developed by LEGO employees”, says Klaus Toustrup, Architect, Partner C.F. Møller Architects. 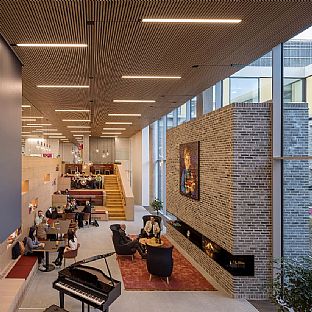 An important element in LEGO® Campus is the ‘People House’ a concept developed in close collaboration with employees that provides a space for all colleagues to network and play during and after working hours. With initial designs first developed in 2014, the ‘People House’ is just one of the many features across the campus that enables a more flexible environment to work and play and is reflective of the hybrid working style that is in place across the LEGO Group. Created as a place for relaxation, inspiration and recharging, the ‘People House’ features facilities including: a state-of-the-art fitness studio, creative workshop space, a LEGO homestay for visiting employees, a cinema, outside park and activity zone, kitchen for communal cooking and networking and a health clinic. Employees’ families are also welcome to use the facilities.

“It’s a great moment to see our new Campus officially open after many years of planning and construction. Many colleagues have contributed to shaping a workspace that reflects our values and instills a sense of fun not just for our employees in Billund, but for all our LEGO teams across the world who regularly visit. Our mission is to inspire children so it’s important we provide a vibrant, playful workplace that enables employees to deliver inspiring experiences for kids”, says Niels B. Christiansen, CEO of the LEGO Group. 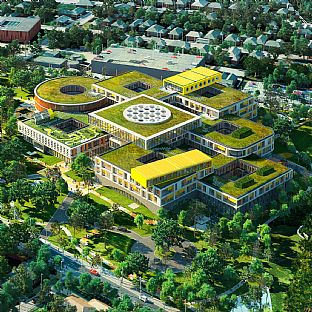 Creating a sustainable workplace
Sustainability is a focus for the LEGO Group, and this has been central to the design of the new Campus. Achieving a Gold level LEED certification, the Campus is a high quality, low-energy office building partly powered by solar panels installed on the roof of the nearby parking facility.
In addition, the Campus also features:

LEGO Campus will officially open from April 5th for all LEGO colleagues and their families. Celebrating its 90th anniversary this year, the LEGO group has grown from a small carpenter's workshop to a brand present in more than 130 countries worldwide.

About the LEGO Group:
The LEGO Group’s mission is to inspire and develop the builders of tomorrow through the power of play. The LEGO System in Play, with its foundation in LEGO bricks, allows children and fans to build and rebuild anything they can imagine.

The LEGO Group was founded in Billund, Denmark in 1932 by Ole Kirk Kristiansen, its name derived from the two Danish words LEg GOdt, which mean “Play Well.” Today, the LEGO Group remains a family-owned company headquartered in Billund with products sold in more than 130 countries worldwide. For more information: www.LEGO.com