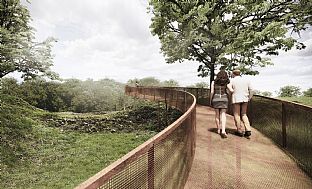 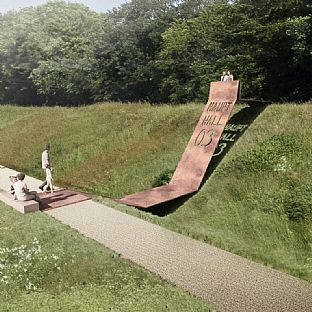 C.F. Møller Architects won the contract to create an experience landscape for the historic Danevirke fortification, and the firm is now revealing that the future presentation of the fortification combines protection of the site with communicating historic highlights. 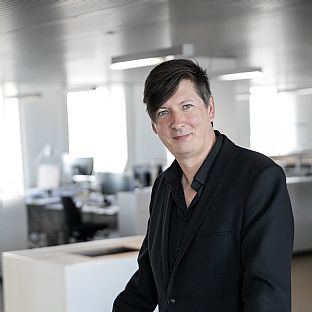 The historic Danevirke fortification is considered the largest ancient monument in the Nordic region and was together with Hedeby designated a World Heritage Site by UNESCO in 2018. Increasing visitor numbers and the associated need for better information and orientation, as well as new accesses and recreational areas have led the municipality of Dannewerk to commission a new landscape and urban space concept for the historic monument and its surroundings in an architectural competition, which C.F. Møller Architects won in 2020. Now C.F. Møller is ready to reveal the result of their work and provide insight into how the landscape concept will be realised.

The landscape concept includes the central area around the Main Wall, the Kovirke Wall, the North Wall and the Krumwall. It includes parts of the ancient army road, historic forts and redoubts, the drained former Dannevirke Lake, as well as the central archaeological park at Danevirke Museum, where, among other things, Valdemar's Wall from the 12th century, the Gate to the North and a cannon redoubt from the Schleswig Wars are important attractions.

- By creating new looped walkways that connect the site's many highlights, visitors are guided to entirely new experiences, while accessibility is increased, and the archaeological substance is protected from wear and tear. This will be achieved in part through raised, floating Corten steel paths on or over the most sensitive parts of the monument and the natural environment, says Julian Weyer, partner and architect at C.F. Møller Architects. 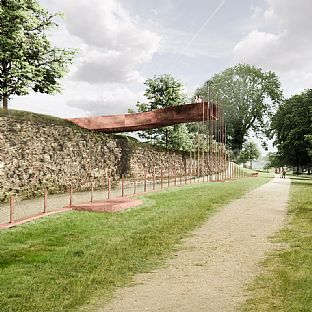 Enhanced natural values
At the Gateway to the North, the section-profile of the rampart has been recreated from earlier archaeological excavations in abstract form as a silhouette. And at the remains of Valdemar's Wall, a new viewing platform allows visitors to experience the original height and impact of the fortifications in the landscape. Elsewhere along the extensive fortification, interpretive points in the form of Corten steel sections illustrate the design of the ramparts through different historical eras, complemented by seating and, in some places, shelters for overnight visitors.

In addition to communicative and touristic aspects, the landscape concept places emphasis on enhancing the natural values of the area, for example by creating a new wetland area at Dannevirke Lake, and on improving activity areas, recreation facilities and meeting points such as playgrounds and festival areas for the local community to use all year round.

Construction is planned to begin in mid-2023 and be completed by mid-2024. 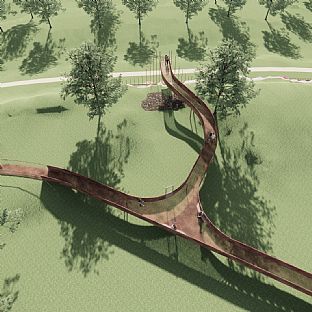 Background to the development of Danevirke
The starting point for the work is an extensive preparatory work, for which the community of Dannewerk was responsible in cooperation with the World Heritage Office in the State Archaeological Office, the Schleswig-Flensburg district, the Sydslesvigsk Forening and the Amt Haddeby. As part of the preparations, the need for development of new visitor experiences and improved protection of the monument were identified as key objectives. For this purpose, attractive paths along and across the ramparts as well as circular paths with information points and inviting recreational areas are to be created. At the same time, accessibility and mobility connections must be improved and the general importance of the landscape area as a nature reserve reinforced. C.F. Møller Architects won the contract to create the landscape concept, which now forms the basis of a grant from the Regionalentwicklungs- und Umweltausschuss in Schleswig-Holstein.