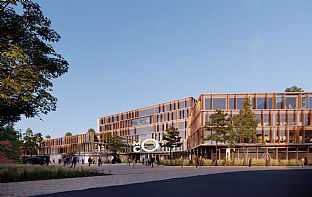 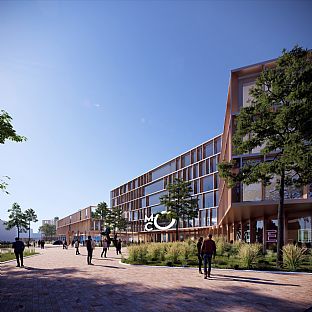 TV 2 Danmark, Jysk Fynske Medier, SDU, TV 2 Fyn and Media City Odense (MCO) have signed a letter of intent with DSB Property Development to create a media city in the city of Odense. The first phase of the new media city, which according to the vision for the project will be ready in early 2026, will set new standards for innovation and collaboration and provide the framework for the world's best workplace.

The partners behind Media City Odense have for some time been exploring the possibility of creating a physical Media City Odense with a group of media, tech and educational institutions. In this context the media cluster is in dialogue with DSB Property Development (DSB EU), which owns the land next to Kvægtorvet, where TV 2 Danmark is located, by the railway line in Odense. This cooperation is now culminating in a letter of intent, which paves the way for DSB EU to go in search of an investor who can become a partner in the construction process and send the project into the next phase. 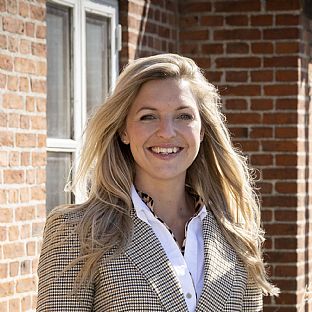 “We have been looking forward to unveiling our vision for a physical Media City Odense. It will take cluster collaboration to a whole new level and give all the participating companies and institutions a huge head start when it comes to recruitment and development”, says Media City Odense director Anne Dyrehauge.

The project is inspired by Media City Bergen in Norway, where many of the most important media players in Norway are gathered under one roof. The Bergen experience shows that the synergies of moving together are great, both in terms of production and increased recruitment. 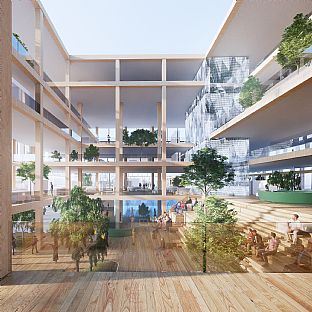 The world's best media cluster
The ambition is to become Denmark's leading media cluster and provide the framework for the world's best workplace. In addition, the aim is to create a new green district anchored in Odense's identity. The building must be noticeably sustainable and, not least, future-proof, so that there is flexibility as companies grow and change.

C.F. Møller Architects has developed a vision for the physical framework and the first tentative sketches for the building, which will accommodate both traditional media companies and the surrounding ecosystem such as tech companies, marketing/communications, film, game developers and educational institutions. The building has the potential to accommodate more than 40,000 m2 and it is an important parameter for the partners in the MCO that there will be space for companies of all sizes including smaller startups. 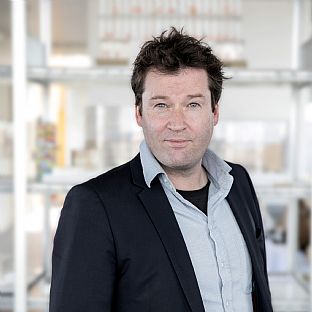 “Media City Odense is a fantastic vision, and we are happy to contribute to the realisation and to give physical form to it. The potential is truly great; both for users and visitors, creating entirely new and unique communities and professional environments in new green and sustainable settings. The project is anchored both locally and naturally in the centre of the city. We have focused on creating a framework for the development of a social, spatial and professional dynamic, which gives a very special identity that has both a national and international significance and format”, says Michael Kruse, partner and architect at C.F. Møller Architects.

Illustrations show a vision of how the physical Media City Odense can look like. The final design has not been determined. 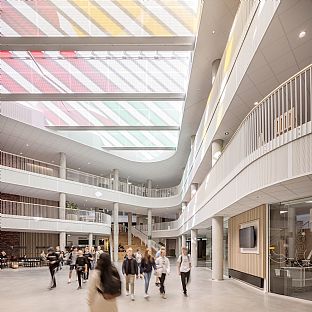 Experienced city and campus developers
C.F. Møller Architects is behind a similar project in Horsens. Here, the architects have developed both a plan for Campus Horsens, which is a new urban campus area with the railway station as its neighbour, and VIA University College Campus Horsens itself, which brings together education, entrepreneurship and citizens in a constructive melting pot inaugurated in 2021. In addition, C.F. Møller is also behind the development of Frederiks Plads and CeresByen in Aarhus, Denmark, which mixes business and housing, as well as the development of CBS Campus in Copenhagen and NTNU Campus in Trondheim.

About Media City Odense
Media City Odense (MCO) is a non-profit organisation founded by TV 2 Danmark, Jysk Fynske Medier, University of Southern Denmark and TV 2 Fyn. Odense Municipality is a strategic partner. The nascent media cluster is continuously growing with new members from the media industry and the surrounding ecosystem and numbers 16 members at the time of writing. The secretariat is based in the old railway station in Odense and is, among other things, behind the MCO MediaTech Festival conference. Read more at www.mediacityodense.dk.