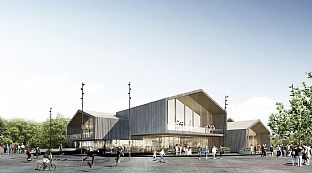 The municipality of Ikast-Brande is now taking a big step towards a major expansion of the International School and the realization of a visionary project for the city. C.F. Møller is behind the design of the municipality's new "Heart".
The first step of the Ikast-Brande Municipal Council's visionary plan Vision Vestergade is now in the process of becoming a reality. C.F. Møller is behind a major project at the International School Ikast-Brande with a much-awaited expansion with both halls, multi-functional and educational facilities. The project will make the educational facilities at the school even better, but at the same time must create a new meeting point centred around an area of fast growth in Ikast. "This signifies a huge gain for the area and a lighthouse, which will attract attention from the surrounding areas", says the Mayor of the Municipality of Ikast-Brande, Carsten Kissmeyer, who emphasises that work has been ongoing for a while to bring the project to fruition, but that it can now see the light at the end of the tunnel in that the majority of the funding has been secured. Collective building bonds together The new central area in Ikast will be a meeting point where meaningful relationships between various societal and age groups can be formed and maintained. The project enables the establishment of buildings and outdoor areas, to create and promote inclusive and integrative social and cultural meetings and gatherings. The plan for the project has changed since the original Vision Vestergade, which the Municipality of Ikast-Brande had drawn up. Now the project is to be realised with a marked collective building called "The Heart", which will be surrounded by a band of activities with a rich multitude for the community, exercise and recreational pursuits. Collaboration between school and municipality The realisation of the project implies that Ikast can look forward to a new and marked increase in construction of just under 4.000 m². Here will be found ample opportunity for both school and leisure activities. There will also be social-economic work opportunities in the vicinity including, for example, cafés. Financing of the project has been in the pipeline for a while, but a collaborative effort between the International School of Ikast-Brande and the municipality's visionary project now means that the project can commence. "We were even working on a project of our own for our students and their parents, so we could easily see that it would be better to align ourselves with Vision Vestergade", says Niels Laurits Thygesen, Chairman of the school board. His voice is echoed by the school's headmaster: "Our 200 students can now look forward to even better educational facilities. I am particularly pleased that it will be possible for the school to have its own hall for sports and other events and activities", explains the Headmaster of the International School of Ikast-Brande, Ricardo Passo. A building to inspire A number of local and national collaboration partners have joined the field to ensure the project in Ikast-Brande Municipality comes to fruition. One of these is Bestseller, which being based in Brande becomes a major investor, as was the corporate parent group concerning the original building of the International School of Ikast-Brande. At the same time Realdania has expressed its interest in the project with the promise of contributing with a ten-figure amount in the millions of Danish krone. "We view the project as a house, with its contents and what it can offer as being inspirational to others, in the establishment of similar new facilities across the country. It is interesting that the project has worked with meeting and activity settings where people of different social and ethnic backgrounds can come and share experiences and interests. This perspective of inclusion, which lies behind the project, is very interesting to follow", says Realdania's Programme Manager Per Schulze. Another anticipated supporter of the project is the Local and Landscaping Foundation. C.F. Møller was also behind the present premises of the International School of Ikast-Brande, which was completed in 2013. It is expected that the construction company KPC, who also built the school, will be contracted for the new expansion.

More about the project