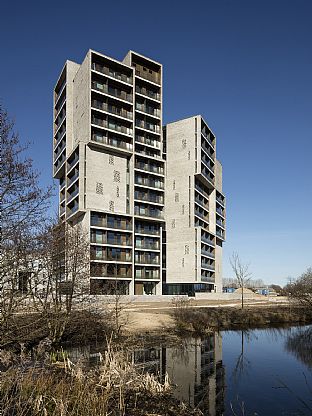 The C.F. Møller-designed Campus Hall, University of Southern Denmark, has been awarded Odense Municipality's Architecture Award 2016 for a fine and attractive construction project. 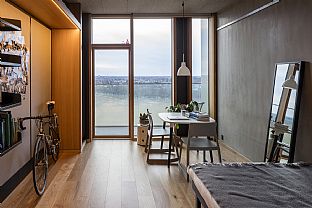 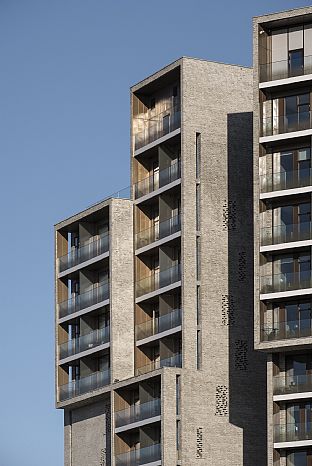 The Campus Hall is a remarkable building at the University of Southern Denmark (SDU). This is the introduction to the jury's assessment of C.F. Møller's Campus Hall in Odense. The 15-storey building has just been awarded Odense Municipality's Architecture Prize 2016. "On the entire team's behalf, it's a great honour to receive this prize. This building has a unique, lively atmosphere, and throughout the project the level of ambition was really high," said Julian Weyer, C.F. Møller's partner responsible for the Campus House Hall of Residence, when the project received the architectural award. Radiating concern for the individual The Campus Hall was ready for occupation at study start after the summer break in 2015, and from day one, this building, funded by the A.P. Møller Foundation, has impressed Odense Municipality. "It's convincingly, playfully light and elegant. The architectural finish scales the building, so that it quite naturally establishes relations with the surroundings, despite its relative height," according to the jury. "Overall, the Campus Hall radiates concern for the individual, for the fellowship at the college, and for the value of networks, making the hall of residence an example to follow of how architecture can build communities, stimulate fellowship and develop relations," the jury continued. The new student housing for 285 residents has been donated by the A.P. Møller Foundation, and is based on a strong community spirit, as a place for Danish and international students to meet and build ties across cultures and nationalities. The building's distinctive shape makes it easily recognizable on the campus, as a landmark for the university and the city alike. The mix of residents should also make it easy to create useful network, as up to a third of the homes will be occupied by international students, which constitute about 20% of students at the University of Southern Denmark. Communal heart The idea of attractive communities is fundamental to the design, manifest in the way the 250 student residences are located in three interconnected 14-storey towers, clustered around a common core. This means that the residence has no front or back, but appears attractive from a 360-degree perspective, with well-lit rooms featuring private balconies and generous shared kitchens and lounge spaces in the middle. The common areas are not only present on the residential floors: The Campus Hall also features a ground floor café as well as group rooms, study areas and party spaces on the top floors, with roof terraces on several levels enjoying a magnificent view of the city and university. The shared areas are carefully graded from small and intimate communities to larger rooms for big occasions, to establish a balance between the common and the need for privacy. Green and energy efficient The Campus Hall is a low-energy construction made from quality materials that meets the requirements for low-energy class 2020 and gives priority to public transport and cycling - each resident has a bike available. Despite its unique height, the student housing blends organically into the surrounding protected forest landscape, with its own park and small lake. C.F. Møller Architects acts as lead consultant, in cooperation with C.F. Møller Landscape and engineers Niras. The donation from the A.P. Møller Foundation is a total of 385 million DKK.