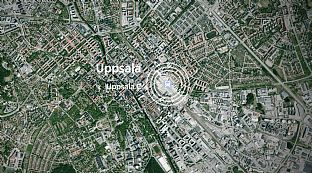 C.F. Møller Architects, together with WSP, will develop the area of Uppsala Central Station into a more vibrant and sustainable area for Uppsala’s residents and travellers alike. The project will accompany the expansion of the city and public transport services, including the increased capacity of the East Coast Line.

The population of Uppsala is increasing, and growth in the business community is strong, driving the need for new housing and space for more businesses. C.F. Møller Architects has been awarded the Uppsala C part of the UppsalaUrban Development Project. In brief, the project is a development of the station and track area, which in turn will provide opportunities for more housing, and business and workplace growth, while enabling more sustainable travel.

The intention of the urban development plan is to take a holistic approach to Uppsala Central Station and its surroundings. This will ensure the station has the capacity required to meet projected traffic numbers, and to function as a local, regional and national hub for public transport, while also accommodating the pedestrian flow that currently moves in and through Uppsala's central station area.

- For many years we have worked on urban development projects in both Sweden and Denmark, most recently with the covering of the railway yard in central Aarhus. We already have a handful of projects in Uppsala and we look forward to contributing to making the city even more sustainable and the central station area more vibrant,” says Mårten Leringe, CEO and architect at C.F. Møller Architects in Stockholm.

Important features include connecting the site for pedestrians, cyclists, public transport and vehicle traffic, and to take advantage of and develop existing values present ​​in the adjacent parks, squares and architecture. Another important aim of the project is for Uppsala Central Station to be sufficiently attractive to create increased added value for the surrounding areas. The proposal for the urban development project will provide three different options for the expansion.

- This is one of Sweden's most exciting urban development projects and has a major impact on how we can develop the region together with Mälardalen and Stockholm. How we travel, live and work are key issues for developing the future Uppsala,” says Emelie Arnoldsson, Creative Director and project manager for the ptoject at WSP.

The Uppsala C - Uppsala Package is a collaboration between Uppsala Municipality, Region Uppsala and Jernhusen.

C.F. Møller has been involved in several major urban development projects in Sweden, Norway, Denmark, Germany, the United Kingdom and Belgium. Among the Swedish projects, the proposal for the New Slussen Development stands out. This was developed in collaboration with Foster + Partners. Together with Elding Oscarsson, the office won the competition for Lund Central, and in Aarhus, Denmark, C.F. Møller Architects recently submitted a proposal for covering the railway tracks to create a green, car-free and vibrant district for all,  the new Banekvarteret. In Oslo, the office has several large development projects at Oslo Central Station, including Fjordporten, which combines successful traffic logistics with internal and external urban spaces.