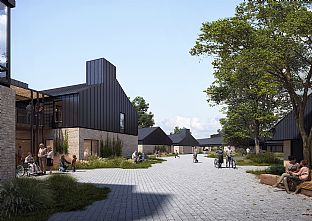 C.F. Møller Architects and skala architecture's winning proposal shows a care centre designed as a small town with a focus on quality of life and care for the residents – and good working conditions for the staff. 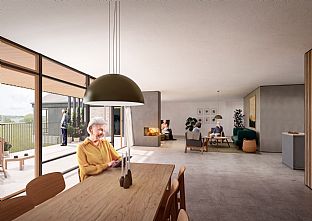 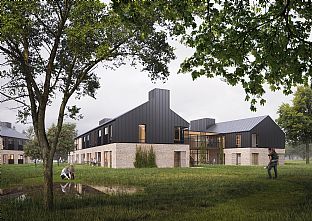 The winner of the architectural competition for the Care Centre Sjælsø has been chosen, and it was the proposal from C.F. Møller Architects, skala architecture, ABC - Consulting Engineers and Adserballe & Knudsen which was selected as the best proposal.
The overall design of the winning proposal is a series of independent buildings, arranged in a circle around the existing care centre, whereby the new building is naturally linked to the existing buildings. The emphasis is on well-being and a safe environment for the residents which supports the Danish Rudersdal Municipality's policy for the elderly and human dignity as well as creating good working conditions for the staff at the centre.

- Rather than thinking in terms of a single building, the idea is to create a housing complex or 'city', where residents live in smaller houses linked by paths and streets and landscape. With a focus on the life quality for residents and well-functioning working conditions for staff, the aim is to create varied building complex that can function as a home for people in need of special care, but above all as a home for people that bring stories, personality and vitality with them, says Søren Tortzen, manager and design manager at C.F. Møller Architects in Aalborg.

In total, 140 new homes will be created, grouped in slender longitudinal buildings, two by two around a common area. In the space between the care centre and the new houses, streets, paths, and squares will be created that are safe and enriching for the residents to walk through and helps to signal modern housing rather than institution.

- The buildings will be situated on the first row of the protected, scenic surroundings along Sjælsø - a location that commits. We have chosen a holistic approach, where the entire site is used, creating space and views between the buildings. The zone facing North, where the terrain slopes towards a lake, the buildings have one floor with the gables facing the surroundings. In that way they adapt to the landscape and the existing buildings in terms of scale and strengthen the experience and connection to the beautiful landscape," says Niels Bondrup Jensen, creative director and design manager at skala architecture.

The original Care Centre Sjælsø was built in 1974 and is now outdated. The project therefore consists of a modernisation and a partial demolition of the current building. All the existing care homes will be demolished and the remaining part of the building will be converted to provide services such as administration, a production kitchen, a communal laundry, therapy rooms and a day care centre. The original care centre will thus form a kind of town centre with the housing spread around it.
The new care homes will be built in three phases in a 360-degree movement around the original care centre. The basic idea is to break with the centralistic thinking of the past, with one large parking lot and one common entrance, and instead work with many smaller houses with their own entrance - at a scale that is adapted to the users and the landscape, and that invites the surrounding community in and the users out.

Good housing with spatial qualities, good daylight conditions and with a good spatial connection to the common areas is created. The sloping facades ensure that all dwellings have a view and that the dwelling never looks over into the neighbour's dwelling with no perpendicular angles. Private terraces and French balconies, as well as the communal terraces adjacent to the communal living areas, create a good connection between inside and outside. There will be both single and two-storey residential units.
The first phase with the construction of 42 dwellings is expected to start after the 2023 summer holidays and be completed for move-in on 1 January 2025, the second phase with a further 42 dwellings is expected to be ready for move-in in the second quarter of 2026, and the third phase with 56 dwellings is expected to be completed in the fourth quarter of 2027.

A total of five teams participated in the competition: 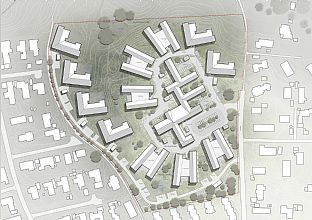