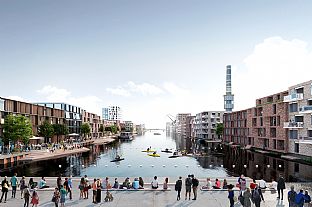 The City to the Water project in Randers wins the Climate Prize at the 2019 Building Awards. 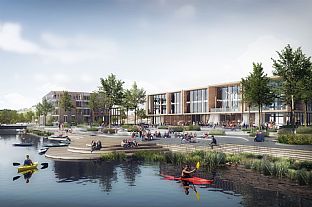 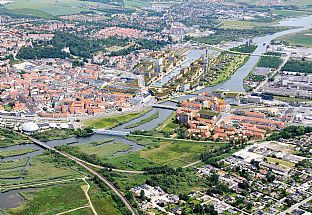 On Thursday 7th November this year’s Building Awards were presented for the Danish construction industry’s major prize-giving event, held at The Plant in Copenhagen.

10 prizes were to be awarded, including the Developer Prize, the Talent Prize, the Project Development Prize, the Innovation Prize; and not least, the Climate Prize, for which C.F. Møller Architects was nominated for its City to the Water project in Randers. The City to the Water project was honoured to be up against two other nominated projects: The Lemvig Climate Laboratory (Lemvig Klimalaboratorium) by 3XN and The Climate City in Middelfart (KlimaByen i Middelfart) by Orbicon.

Climate protection becomes aesthetic and functional
The urban-development project City to the Water in Randers will move Randers closer to the water, while generating climate-change adaptation for the city.

“The winner shows how climate protection can contribute to both aesthetics and functionality of urban spaces in a completely new way. The winning project combines waste-water solutions, with places for recreational activity and promotion of nature, creating new nature experiences close to the city,” – from the jury’s statement with the awarding of the prize.

C.F. Møller started work on City to the Water in 2015 when the design studio was given the task of preparing preliminary studies for the project. Later, C.F. Møller won the competition for the Stork Meadow (Storkeengen) subproject and participated in the parallel project, The Climate Ribbon (Klimabåndet). Both projects originated from the overall City to the Water project. Early in autumn 2019 the design studio won the project competition for City to the Water with the “Our River City” (Vores Flodby) concept, which illustrates the development of Randers, and its close interaction with the river, natural life, and recreational opportunities.

“The projects show that with an innovative design approach where aesthetics and functionality go hand in hand, we can turn our climate challenges into urban improvements for the benefit of the people of Randers,” says Lasse Palm.

City to the Water is a comprehensive climate-development project that seeks to open Randers city centre towards the water. By connecting the old medieval town with the River Guden (Gudenå) and Randers Fjord, the project simultaneously solves the challenges of torrential rain, storm surges and rising sea levels.

City to the Water
Storkeengen (Stork Meadow)
The Climate Ribbon