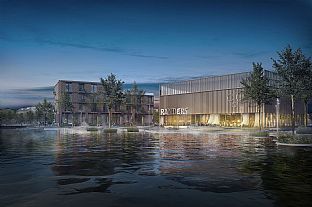 The climate development project “City to the water” by C.F. Møller Architects in collaboration with Randers Municipality and Vandmiljø Randers is in the final for this year's Climate Award, which is awarded by the Danish industry magazine Licitationen. 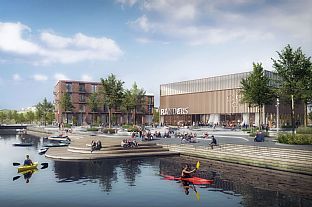 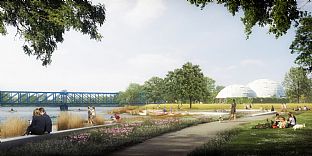 “City to the water” is a comprehensive climate development project with the aim of opening Randers city centre to the water and connecting the old medieval town with the natural environment, the Gudenå river and Randers Fjord while solving the challenges of cloudbursts, storm surges and rises in sea level. The “Climate Ribbon” and “Storkeengen” projects are included in “City to the water”.

“We are really proud to be in the final with “City to the water”. It is an innovative project that both solves specific climate challenges and creates value for the citizens of Randers, by using climate solutions based on nature and bringing the city to the water with solutions other than just walls and dykes,” says Lasse Vilstrup Palm, head of C.F. Møller Architects' Landscape Department.

According to Licitationen, the climate award is given to a company that, in "new, exciting and innovative ways or with entirely new consequences, helps to secure Denmark against emerging and future climate change".

Solution creating added value C. F. Møller's proposal for the Climate Ribbon shows that sea level rise, storm surges and an increased number of cloudbursts are not a problem, but an opportunity to strengthen local identity, urban cohesion and increase the value of future urban development.

“Working with climate challenges at this level is challenging and complex, but the benefits to urban spaces and urban development are huge. It is therefore also good to see that Randers Municipality recently received funding from Realdania's “Byerne og de stigende havvand” (“Cities and rising seawater”) pool to specify and realise the Climate Ribbon. This shows that innovative projects such as the Climate Ribbon and Storkeengen will not just remain desktop projects, but actually become a real benefit for the citizens of Randers,” says Lasse Vilstrup Palm. The Climate Ribbon is a six-kilometre-long ribbon between Randers city centre and the Gudenå river, which is an overarching and holistic climate protection strategy prioritizing the areas along the water’s edge where investment in high water protection provides the most added value for the city. Historical and cultural focal points along the water's edge will be upgraded to new attractive city and water areas that celebrate the pulse of the city, the city's industrial history and the meeting of water and nature.

“Our proposal for the Climate Ribbon shows that, at the very large scale, storm surge protection can be used as a continuous strategic urban development tool and at the same time create specific new urban space experiences with the climate and nature as a starting point,” says Lasse Vilstrup Palm.

Uniting landscape and city
With Storkeengen, climate protection will not only help to deal with rising water levels, but also add value to the area. This will be achieved by combining visible wastewater solutions with areas designated for recreational activity and nature dissemination, increasing the area's accessibility and nature right into the heart of Randers.
With the help of new cloudburst routes in Vorup, water will be collected from roofs, car parks and roads and led on to Storkeengen. Here, the water will be collected in purification basins, designed as natural wet meadow areas, before being led out to the Gudenå stream. A new dyke between Storkeengen and the Gudenå will ensure good purification of the rainwater and also protect the low-lying parts of Vorup from storm surges. The dyke will also create new pathways between the centre of Randers and the nature areas to the west.

Storkeengen is a climate adjustment project on nature's own terms - also when it comes to the project's technical wastewater solutions, which are intended to strengthen the natural qualities of the wet meadows.
“It is important to emphasize that a significant part of the success of the water projects is due to visions from Randers Municipality and Vandmiljø Randers and the cooperation we have had with both of them - from the first analyses to the specific solutions. Now we are crossing our fingers that we will win the 2019 Climate Award together,” says Lasse Vilstrup Palm.
The winner of the 2019 Climate Award will be announced by the industry publication Licitationen which is behind the award during a Building Awards 2019 gala show in Copenhagen on 7 November.
The Climate Ribbon was created as a collaboration between C.F. Møller Architects, Orbicon, Sadolin & Albæk (Colliers) and De Urbanisten. Storkeengen was created as a collaboration between C.F. Møller Architects and Orbicon.