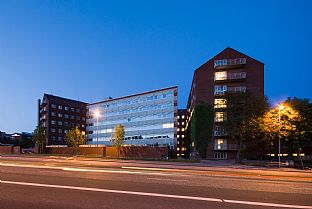 The old Aarhus Municipal Hospital is to be transformed into a new campus area for Aarhus University, and C.F. Møller Architects won the contract for the first phase. 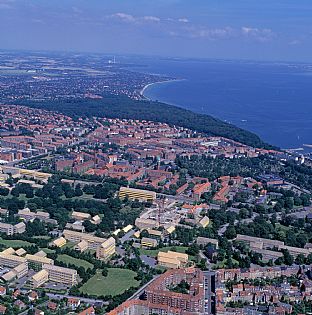 Forskningsfondens Ejendomsselskab A/S (FEAS) is the client for the project, and the aim is to develop the old hospital into a new campus area to be known as ‘Universitetsbyen’ (University Village) for Aarhus University.

C.F. Møller Architects have won the contract to renovate and refurbish the first phase of the former hospital complex to create new laboratory facilities for Aarhus University. MOE are acting as consulting engineers as a subcontractor to C.F. Møller.

“We are delighted to have won the contract and look forward to getting on with the job. This is the perfect project for us, as we have extensive expertise in the fields of laboratories, universities and hospitals, and we know the old hospital and Aarhus University well already. Both complexes were originally designed by us and are an important part of C.F. Møller's history,” says Klavs Hyttel, Chairman, Partner and Architect at C.F. Møller.

The first phase of the transformation project will be the biggest. It involves a building complex, consisting of five separate buildings totalling 28,900 m² of floor space. Overall, FEAS expects that the new buildings on the site will constitute 110,000 m².

Historical project
C.F. Møller and Kay Fisker won the competition to expand the municipal hospital in 1931, and since then the firm has left its mark on the development of the area on numerous occasions. In 1932, the two original partners teamed up with Povl Stegmann and Landscape Architect C.Th. Sørensen to win the competition to design Aarhus University. Both projects helped establish C.F. Møller as one of the leading architectural practices in Aarhus, and they remain part of the firm's heritage and DNA. C.F. Møller Architects now have offices in Aarhus, Aalborg, Copenhagen, Stockholm, Oslo and London.

Experienced research and university architects
The Aarhus University campus was selected as one of 12 architectural Danish masterpieces in 2006 and was included in the Danish architectural canon. Architects from all over the world visit Aarhus to see the campus park and buildings. On the occasion of the award, the Ministry of Culture said:

“Aarhus University signalled better times for the city and country during its construction in the thirties. The architecture is modern, anti-monumental, an organic interpretation of the open campus in the middle of the city, and a distinctive and robust testimony of how beautiful and humane a large structure in an urban context can be, developed over a period of more than 70 years.”

C.F. Møller Architects are still involved in the ongoing modernisation of buildings and the campus area. Experience gained in Aarhus has recently been applied to such landmark projects as The Mærsk Tower for the University of Copenhagen, a state-of-the-art research complex, and Biomedicum, for the Karolinska Institute in Stockholm. The Karolinska Institute is one of the world's leading medical universities. Known for the award of Nobel Prizes in medicine and physiology. Biomedicum will officially open in the autumn of 2018 and creates a unified research environment. The laboratory centre will feature extremely flexible laboratory and administration facilities, which are expected to function as a catalyst, creating seamless collaboration between the different research and study environments.