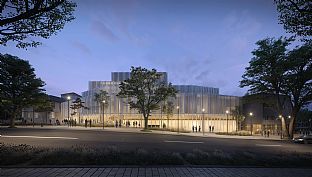 The new plans demonstrate a reinforced concept, which strengthens cooperation between the four cultural providers and contributes to an overall revitalisation of Kristiansund. 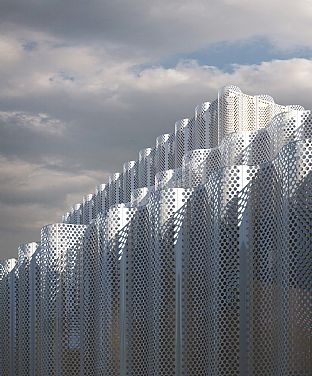 In 2010, C.F. Møller Architects won the competition for a new Opera and Cultural Centre in Kristiansund, in collaboration with the engineers COWI and Buro Happold, as well as AIX for theatre engineering and Gade Mortensen for acoustics. The project looks to facilitate cultural institutions with both important national and regional responsibilities. It encompasses both restoration works and new build architecture, covering the need for functionality and increased security while maintaining high architectural quality.

The four cultural institutions that are to be brought together currently constitute the mainstay of cultural life in Kristiansund and Nordmøre. Two of these are national and regional initiatives; The Opera in Kristiansund AS (OIK) and the Nordmøre Museum Foundation (SNM). Neither of these currently have suitable premises to be able to carry out their operations, and thus cannot manage to be the cultural providers and developmental players the government wants them to be.

The other two players in the centre are Kristiansund Library and Kristiansund Cultural School. These players will ensure that the centre becomes the city's important "third place", with opening hours from 7 a.m. to 11 p.m. It will be a neutral space, open to all groups, across generations, lifestyles, cultural and ethnic backgrounds.

“With this project, we will solve a national problem and respond to a regional challenge by enabling the opera and museum to finally produce and perform for the public’s benefit, fulfilling their function in developing the community," says Cultural Director and Project Manager Eigunn Stav Sætre of Kristiansund Municipality. She continues: “At the same time, we will ensure that national cultural institutions can finally become just that, by establishing a cultural infrastructure that allows them to set up productions and engage in activity in the regions as well. And last but not least: we will start the revitalisation of Norway's most distinctive restored city, through rehabilitation, new construction and the establishment of good urban spaces for everyone."

In connection with the Ministry of Culture's budget proposal for 2019, Kristiansund was awarded NOK 5 million for revising the New Opera and Culture Centre in Kristiansund project, and C.F. Møller Architects, together with its partners, has reworked the original proposal.

The aim of the feasibility study has been to clarify whether the project could be scaled down sufficiently without compromising on the necessary functionality and quality of the building.

The new plans for the project reinforce the concept
The project's gross area has been reduced by over 30%, so that it is now approximately 10,000 m2. This has been achieved without compromising on logistics and functionality. The potential for improvement has been in increased collaboration between the institutions and the repurposing of land, alongside the reduction in total area.

"In the space between the community centre on Kongens plass and the Langeveien lower secondary school on Skolegata, an enclosure will be created where Kristiansund's new public cultural stage will take its place," says Christian Dahle, partner at C.F. Møller Architects.

The enclosure is a white wavy curtain in perforated aluminium which encloses the cultural life and functions, creating space for activities and togetherness. The perforated façade acts as a sunshade; allowing daylight into the foyer area during the day and providing a glimpse of the activities in the centre in the evening. The façade gives the new intermediate building a light and timeless expression.

Architectural bridge-builder
Langveien lower secondary school was built in 1924 and is one of the few buildings that remains in the centre of Kristiansund after the bombing in April 1940. The community centre was restored following the war. The new Opera and Culture Centre ties these two eras together and puts this story on display by being tied to neither one building nor the other in terms of style, but by connecting them with an abstract, non-figurative facade.

“The new centre continues the restoration project in Kristiansund, which has been dormant since the 1970s. The Opera House in Kristiansund, the Opera's ballet centre, Kristiansund Symphony Orchestra, the cultural school, Nordmøre Museum and Kristiansund Library will use the existing buildings and the new space in between.

The new total cost is NOK 690 million, of which county authority contributions amount to NOK 150 million and we are hoping that the government will grant the remaining NOK 150 million. The project will then be able to proceed to the planning phase and is scheduled to be completed in 2022.

The project joins a number of exciting cultural projects C.F. Møller has been working on the last few years, including the "Heart" in Ikast, which is a new meeting place for culture and communication, combining teaching, activities, community, exercise and play in new ways. Odeon Music and Theatre Centre in Odense, the rehabilitation, conversion and extension of Aarhus Theatre as well as a few smaller projects in Norway such as Molde Cultural School and Sogn og Fjordane Art Museum.