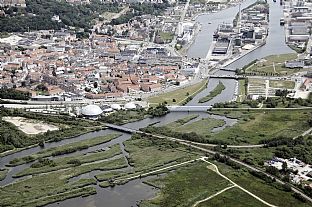 Over the next four months, together with other experts from Denmark and the Netherlands, C.F. Møller Landscape will develop new ways to protect the centre of Randers against storm surges. This is being done as part of an EU project with the aim of making the city resilient against storm surges, without creating barriers to water and nature.

Two teams of experts, with C.F. Møller Landscape, together with Orbicon, De Urbanisten, Gemeinschaft, and Sadolin & Albæk forming one team, have been selected to participate in the EU-supported project, the Climate Ribbon, which is about adaptation to climate change. Over the next 4 months, the two teams will develop a toolbox with new solutions that can make the centre of Randers resilient against storm surges. And high demands are being made of the experts.

"The two teams must show how we can protect the city of Randers from a storm surge, without building high dykes, walls and embankments, but instead by creating better access to the water. The River Guden and Randers Fjord are really important to the city's identity, and adaptation to climate change must not take us further away from the water. To do that would not be compatible with the vision of bringing the city to the water", says Nels Markussen who is the head of Nature and Environment in Randers Municipality.

Green solutions without walls and embankments
During the period, the two teams will meet 4 times in Randers to look at the area, exchange ideas and give each other feedback. Local professionals and selected stakeholders will also comment on the ideas, ensuring that the final toolbox will be adjusted to local conditions. It is important that any investments in adapting to climate change give the largest possible value to the city, explains Nels Markussen: "For us, it is all about finding solutions that we can appreciate every day, and not just if a storm surge strikes. Such solutions should be attractive to the citizens, and in this way we get more from the investments that are required."

Therefore, the experts must develop solutions that not only protect the city from storm surges, but that also have a secondary value and function. This might be new activities, shared spaces, urban nature, new paths or something completely different. It will be up to the two teams to identify the best ideas. It has however been stipulated that nature must in some way or other have an important role.

"We are pleased to have been appointed, and to be part of this visionary project together with Randers Municipality and lots of talented colleagues. It fits perfectly with C.F. Møller Landscape’s way of working. We love being the coordinator of an ambitious and visionary project like the Climate Ribbon, where we bring together various disciplines, and combine climate change adaptation and urban development with new social communities and achievable solutions, in a unifying architectural concept, says Lasse Vilstrup Palm, Associate Partner and head of C.F. Møller Landscape.

International interest in the Climate Ribbon
There has been considerable interest in being part of work to create future protection against storm surges in Randers. A total of 13 different teams of experts wanted to participate in the Climate Ribbon, which is part of the City to the Water project. More than half the teams included international experts. Mia Rix, project manager for the Climate Ribbon in Randers Municipality, is very pleased with the international interest. She explains: "It is really good for the project and for Randers, because it gives us access to the latest technologies and experience from Europe that we can then build on", adding: " and it of course shows that it is not just us facing this challenge. This is something that many cities, both Danish and European, will be working with in the years ahead".
Both selected teams have Dutch participants, and according to Mia Rix, Holland is an important place to look to for experience when it comes to water. Large areas there are very low, and this means that the Dutch have been working to protect their cities from water for many years. Lessons learned from this process can now be put to good use in Randers.

An important step on the road
The development of the Toolbox is an important step on the road to making the city resilient against storm surges. In connection with Randers Week 2018, the city's citizens will get the opportunity to see and comment on the proposals from the two teams of experts. Randers Municipality will then continue to work on the toolbox ideas, which will then be included in the wider development work to do with the City to the Water project.

Randers Fjord has been designated as one of the 10 areas in Denmark where the risk of extensive damage from a storm surge is greatest. It is therefore essential to work on how Randers can be made more resilient against flooding. This is in order to protect the low-lying districts that are already at risk of flooding, and also to ensure the possibility of developing the port areas in the future, as planned for in the City to the Water project.

Therefore, the municipality of Randers has initiated the so-called parallel assignment concerning the Climate Ribbon. The Climate Ribbon is part of the Central Jutland adaptation to climate change project, Coast to Coast Climate Challenge (C2CCC). Randers Municipality is participating together with 30 other Central Jutland partners. In total, the 31 Central Jutland Partners are receiving DKK 52 million in support from the EU LIFE Programme for the 24 sub-projects of the 6 year adaptation to climate change project. Read more on the project website www.c2ccc.eu. You can also find out more about the Climate Ribbon at http://byentilvandet.randers.dk

Storkengen is already in progress
C.F. Møller Landscape is already working on the Storkeengen project in Vorup near Randers, which is part of the Climate Ribbon, and has attracted a certain amount of international attention due to it being seen as an “architectural multi-tool”. The adjustment to climate change project in Vorup near Randers, will resolve the district's current and future climate challenges by transforming the adjacent nature area, Storkeengen, into a public nature park. With the help of climate change adaptation, the nature park will also bring the unique natural delta along the River Guden closer to the centre of Randers, and to its citizens.