The new SIMAC (Svendborg International Maritime Academy) will be the maritime educational institution of the future at the harbour in Svendborg. The open, flexible and modern learning institution is designed by C.F. Møller Architects and EFFEKT. 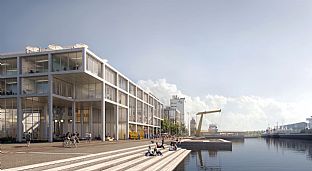 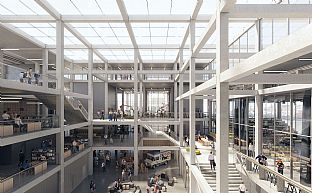 In 2022, the new buildings will be ready to educate future leaders for The Blue Denmark and a number of other innovative industries. In addition to the new SIMAC, the winning team has also prepared a masterplan for how a new district at the North Quay - with housing and businesses - can take shape. It includes a specific proposal for a reopening of Kobberbækken, which will provide new urban green areas and secure this part of Svendborg against any potential extreme rainfall in the future.

The architectural competition was carried out by the SMUC Foundation (Svendborg Maritime Education Centre Foundation), which was founded with the purpose of owning, developing and building the new SIMAC, as well as operating land and buildings in cooperation with SIMAC. Among other things, the project has been made possible thanks to a substantial donation of DKK 100 million from A.P. Møller and his wife Chastine Mc-Kinney Møller’s Foundation for Public Purposes.

The new SIMAC winning project signals openness, flexibility and room for ideas
The proposal from C.F. Møller Architects and EFFEKT was selected as the final winner of stage 2 of the architectural competition. The judging committee describes the winning proposal as a strong starting point for establishing the new educational building and for the municipality's further work on the development of the North Quay.

Chairman of the Board of the SMUC Foundation, Frederik Ejlers, says,

“In the judging committee, we decided that C.F. Møller Architects and EFFEKT has presented an exciting and well-organised educational institution that reflects SIMAC's focus and visions on openness and flexibility. The new SIMAC will act as a beacon on the North Quay, and the winning project's fine sense of scale provides transitions to the harbour's other large buildings and open spaces. In short: we think the new building testifies to a powerful and energetic institution with room for ideas and great inventiveness.”

Mayor Bo Hansen (S), Svendborg Municipality, says:
“The new SIMAC is part of The Blue Edge, which preserves and future-proofs the harbour in Svendborg. We are very pleased to have received a specific proposal for a masterplan for the area at North Quay, which provides space for both housing and workplaces. We will have nice access to the harbour. The structure and density of the new district resembles the old Svendborg. And the proposal for opening Kobberbækken will provide green connection paths and the necessary protection against extreme rainfall. The work of realising the visions in the masterplan is the responsibility of the municipality and will receive strong focus in the coming years.”

Director Jesper Bernhardt, SIMAC, says:
“We look forward to bringing ships, maritime experiments and the latest technology to the port. With the new framework, we can strengthen innovation and business development in the area. We can also meet the increasing demand for maritime education. The new SIMAC will be a very attractive place to learn, and we can strengthen our role as a maritime powerhouse that can attract and retain talent in Svendborg.”

A combination of modern educational buildings and focus on amenities for the city
The jury commends the winning team for their responsiveness and good co-operation skills in the competition phase. This is promising for further cooperation with the SMUC Foundation to realize the new SIMAC. And with Svendborg Municipality regarding the further development of the master plan for the North Quay.

Julian Weyer, Partner and Architect at C.F. Møller Architects says:
“We are very pleased that our proposal for the new SIMAC and the masterplan has been well received. The new SIMAC is a tribute to the port's distinctive architecture and maritime environment - a flexible and modern building, which through open, rough and robust surroundings lends itself to cooperation. The educational institution will become an integral part of the city and play alongside the new green and recreational urban environments along the harbour."

Sinus Lynge, Partner and Architect at EFFEKT, continues:
“The vision for the new SIMAC is to strengthen the connection between the city, the North Quay and the harbour as a whole. The building can become a landmark for the transformation of Svendborg Harbour and act as a catalyst for city life, education and new businesses at the harbour.”

Read more about the new SIMAC, the competition and the judge's report:
www.SMUC.dk

Read more about Svendborg Municipality's plans for the harbour at:
www.fremtidenshavn.dk

C.F. Møller Architects have great experience with the construction of school and teaching buildings as well as masterplans and urban space projects, among other projects in both Denmark and abroad.

The building:
The new SIMAC will have a gross area of 12,500 m² and contain common areas (such as Campus Square and Open Learning Centre), teaching areas (in different sizes, two auditoriums, laboratories/workshops and simulator centres with virtual learning environments), rooms for administration and technical rooms.