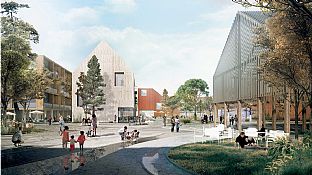 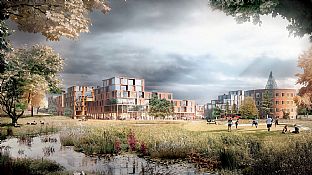 Värmdö Municipality has now completed its parallel project for the development of central Gustavsberg, using four teams of advisers. This former industrial town just over 20 km from Stockholm has thus achieved an overall strategic plan for the town's centre and neighbouring areas, as part of the region's efforts to relieve the strong pressure on Stockholm's housing, infrastructure and population growth. C.F. Møller, TREDJE NATUR and Rambøll have submitted one of four proposals for the town's development, anchored in a number of central key strategies to make Gustavsberg more attractive, not just for residents, but also for visitors. Involving residents The location for this parallel project is an area with potentially 300,000 m² of new urban development, comprising homes, retail outlets and commercial and recreational functions. The proposal from C.F. Møller and TREDJE NATUR is focused on innovating the town's centre as a recreational area, to create unique and attractive living and residential conditions. To ensure that the parallel project proposals are in line with local residents' idea, on 4 June Värmdö Municipality, together with the participating teams, held a dialogue meeting for residents. "Värmdö Municipality must be praised for its handling of the process and involvement of residents. It's fantastic to have this opportunity to present our ideas to the town's residents and politicians, and it's especially positive to get such a good response from both older and younger contributors," says Mårten Leringe, partner in C.F. Møller. The dialogue with residents helped to lay the foundation for part of the political consultation, held on 6 June, on the development of Gustavsberg on the basis of the parallel projects. Dramatic countryside in harmony with the urban centre The centre of Gustavsberg lies in a valley encircled by four granite hills and protected ecosystems. The area also has two adjacent marine areas, in the form of Farstaviken and Ösbyträsk. The connection to these will be re-established to create a town in close contact with the countryside, bringing nature right into the centre. "We propose that Gustavsberg respects the unique landscape around its centre and that the new urban centre is built up closely around a green corridor in which urban nature, rainwater and residents' initiatives can be combined to create a new narrative. In this way, the residents' day-to-day lives will be linked directly to nature, the community and the region's major recreational potential," says Flemming Rafn Thomsen, partner in TREDJE NATUR. The proposal respects Gustavsberg's longstanding, strong building tradition and cultural history. The new centre will complement a number of the existing outstanding buildings in the area, which are rooted in the Golden Age of Swedish functionalism. The Municipality is now launching an action plan for the next stages of the work, which will take place in the autumn. The other participants in the parallel project are Kod Arkitekter /Landskapslaget, Mandaworks/Adept and White Arkitekter.